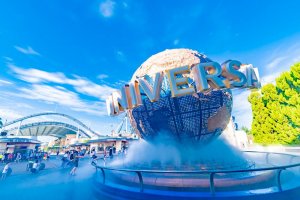 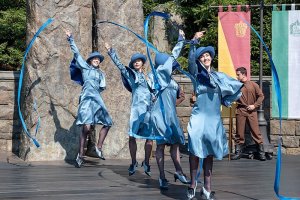 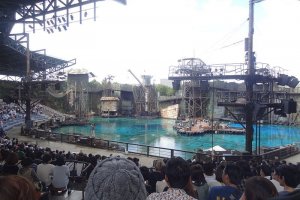 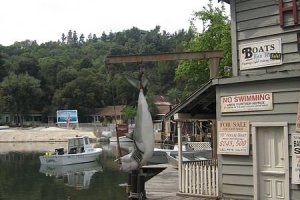 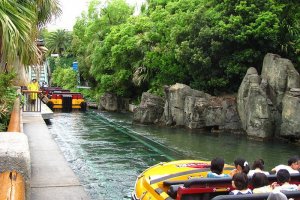 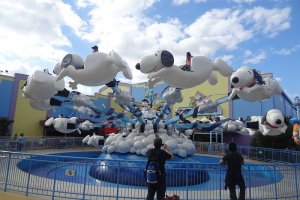 In addition, you have many opportunities to take photos with the mascots of popular characters such as Snoopy, Hello Kitty and the Muppets. There are also daily shows and parades that make a big impression, especially at night with beautiful lighting.

Grab your wands and brooms! It's time to hop aboard the Hogwarts Express and explore the shops of Diagon Alley. Wander through Hogwarts and enjoy the heart-racing rides in this corner of USJ at the Wizarding World of Harry Potter. Timed tickets are required for entry.

Enjoy the live-action show exploring the story and characters of Waterworld! Watch from the edge of your seats as pirates splash across the arena and pryotechnics awe you.

Hit the scenic village of Amity and find yourself on quiet docks and quaint piers. But beware the depths . . . This ride will bring you face to teeth with the terror of Jaws.

Adventurers watch out for some of the most ferocious beasts since time began! Dinosaurs abound here at Jurassic Park. You can fly along with pterodactyls or escape down a watery slide. But remember, keep running.

Get groovy with your favorite banana-loving creatures. The minions are out in full force at Minion Park.

Aged down for the smaller explorers, Universal Wonderland has all your favorite mascots and rides for the kids!

Opening in 2021, Super Nintendo World will be the first of its kind and allow guests to jump their way through Mario's 3D world. Adventure with Yoshi, Peach, Bowser, and the red plumber himself!

Relive Your Childhood at USJ

In Osaka, there is a place where you can relive your childhood and be transported to a fantasy world. That place is none other..

The Wizarding World of Harry Potter

The Wizarding World of Harry Potter or How to feel like a child again! In summer 2014, Universal Studios Japan opened a Harry Potter..

Despicable Me! fans can rejoice as Universal Studio Japan unveils yet another wonderful theme-park, Minions Mayhem, as one of their..

Already been to Universal Studios Japan? First timer? Here are some collaboration events you probably didn't know about.

Universal Studios Japan sets record high in number of visitors. Magic was the theme of 2014, when the Wizarding World of Harry..

I am not a hardcore Harry Potter fan. Really. I mean, I would like to thank JK Rowling for creating this series of books that aspired..

Roller coaster enthusiast or not, Universal Studios Japan (USJ) in Osaka may just be the perfect getaway for you, your family,..

Universal Cool Japan is back for 2016, revamped and better than ever, with five globally recognised entertainment brands helping..

USJ's annual Universal Cool Japan celebration is back for 2019 with its 5th anniversary, showcasing some of Japan's top..

Already jam-packed with adventurous rides, USJ looks to take the theme park industry up a notch this year with its new limited-time..

Super Nintendo World opened in spring 2021 inside of Universal Studios Japan. This is another of the special areas of USJ and fans of all ages can look..

Looking for a midrange hotel in Osaka City? Why not try APA Hotel Osaka Higobashi Ekimae

Osaka is famous for many things, one being delicious foods. Takoyaki, or fried octopus dumplings, are a tasty treat first popularized..

On Saturdays and Sundays from December 4th until December 26th, the Hyatt Regency Osaka will host a Festive European Voyage Afternoon..

Quaint and homey café in a quiet Osaka district

The Kaiyukan in Osaka is the largest aquarium in Japan and at the same time one of the largest in the world. It is located in the Minato district ne..

Namba Yasaka Shrine is a unique and standout destination among Osaka’s sacred spots. Located in the Namba District, Namba Yasaka is famous for its impressive..