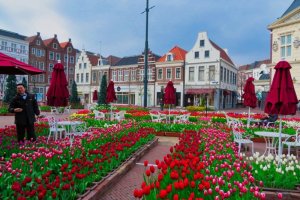 Huis Ten Bosch is one of the largest theme parks in Japan and is located in the south of Kyushu near Nagasaki. The park recreates a Dutch city, since the Dutch started trading with Japan in 1609 not far from the location of the Huis Ten Bosch palace in the Netherlands Visitors can discover picturesque canals, windmills and beautiful gardens.

Various events take place at different times of the year, for example a tulip festival in spring and a fireworks competition in summer.

The resort is divided into two areas: the theme park zone and the harbor zone. The theme park zone houses a modern theater with 3D technology. There is also a haunted house, a mirror labyrinth, a ferris wheel and much more. The main attractions of the harbor zone are a theater and a replica of the Huis Ten Bosch palace, which houses an art museum.

To celebrate the spooky season, Nagasaki's Huis Ten Bosch theme park is hosting a Halloween event that runs up until November..

The Magic of Huis Ten Bosch

Major theme park in Kyushu depicting the Netherlands. Entertainment for all ages. European Food in every zone.

Huis Ten Bosch in Nagasaki is a theme park that offers an ever changing array of things to do and see. It does not just offer a..

New Year's Day at Huis Ten Bosch in Nagasaki; Enjoy unique a New Year's Day with a special Japanese breakfast inside a European..

I prefer electrical storms; however, each time I know a firework display is going to take place I try not to miss it. During my..

The sun has just set and the moon makes presence in the dark blue sky. Suddenly the magic happens: Millions of lights are turn..

Enjoy the 'West meets East' New Year at Hotel Amsterdam, the only hotel standing inside the theme park zone of Huis Ten..

The Magic of Huis Ten Bosch

I had heard about ice bars before, but I never had the opportunity to visit any, until I went to Huis Ten Bosch theme park. I ..

I found the hotel, where I was going to spend a few nights, in a perfect location with amazing views of the bay; it was right in..

Hydrangeas are one of the highlights of Japan's rainy season, and Nagasaki's Huis Ten Bosch theme park showcases thousands..

June is Miffy Month at Nagasaki's Huis Ten Bosch theme park, and the event will celebrate the 'birthday' of this much-loved..

To celebrate the spooky season, Nagasaki's Huis Ten Bosch theme park is hosting a Halloween event that runs up until November..

The 'Special Fireworks' will be held at HuisTen Bosch in Tokyo, Japan. The fireworks will be set to summer songs, anime..

In the movie Rodan, the Saikai Bridge is blown down by the monster's backdraft. A visit here is a must for fans.

The 400-year tradition of Mikawachi porcelain lives on in this Nagasaki village. Mikawachi ceramics feature blue artwork and carved..