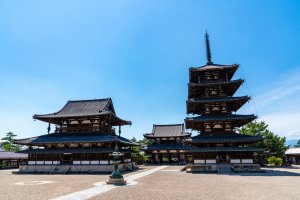 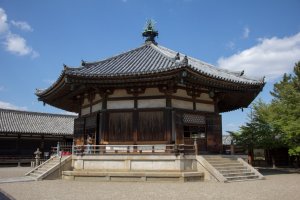 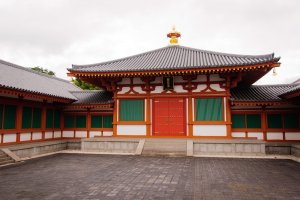 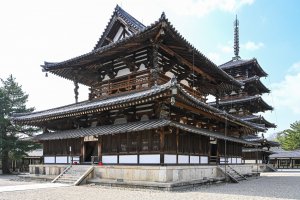 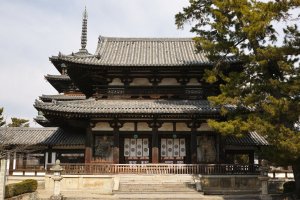 Japan is filled with a wide variety of temples, ranging from modest to opulent and from massive to small. Horyuji in Nara stands out from the rest as it is, not only, one of Japan’s oldest temples, but also home to the world’s oldest surviving wooden structures, making it a one-of-a-kind destination.

Horyuji’s conception began with Emperor Yomei who desired to build a temple and image of Buddha as a form of prayer to combat an illness he was suffering from. Tragically, Emperor Yomei passed away before he could accomplish this goal. Despite this misfortune, the emperor’s wishes lived on with his son. Prince Shotoku honored his father and established the temple in 607. Soon after, in 670, a fire destroyed multiple temple buildings, which were quickly rebuilt by the early 8th century. However, some historians debate whether this fire actually occurred.

Given Prince Shotoku’s profound influence in the early introduction of Buddhism to Japan, Horyuji has stood as a faithful beacon of the religion for centuries and is a preserved storyteller of that history with over 2,300 important cultural and historical structures and articles onsite.

Horyuji is recognized as a UNESCO World Heritage Site and is the first site to receive this designation in Japan. The temple is divided into two precincts—Western (Saiin Garan) and Eastern (Toin Garan). The Western Precinct is centered around Horyuji’s Five-Story Pagoda and Main Hall (Kondo), while the Eastern Precinct is centered around the Hall of Visions (Yumedono). Walk through the expansive 14.6-hectare temple grounds, admire some of the earliest Buddhist structures in Japan, and immerse yourself in the historic atmosphere. Listed below are the must-see spots at Horyuji. Aside from these highlights, the temple is filled with noteworthy buildings, such as a Bell Tower, a library, halls, gates, and more. Be sure to dedicate multiple hours to the magnificent temple.

Chumon marks the entrance to the inner temple complex of the Western Precinct, which is where the Main Hall and Five-Story Pagoda are located. This two-story, four-bay structure is flanked by Japan’s two oldest Kongo Rikishi statues, or guardian deities.

The Main Hall is one of the world’s oldest surviving wooden structures. The remarkable two-story building is decorated with dragon sculptures and features a tiled hip and gable roof typical of Asuka Period architecture. Inside, the hall contains Horyuji’s most important treasures, including elaborate murals of Buddha and bodhisattvas, bronze Buddha statues of Shaka Nyorai (historical Buddha), Yakushi Nyorai (Buddha of healing and medicine), and Amida Nyorai (Buddha of the Pure Land), and wooden statues of the Four Heavenly Kings (Shitenno).

Similar to the Kondo, the Five-Story Pagoda is one of the world’s oldest surviving wooden structures and dates back to the Asuka Period, reflecting a traditional design of that time. The 32.5-meter-tall pagoda houses a collection of clay statues dating back to 711 that depict four scenes from Buddha’s life.

Located north of the Main Hall and Five-Story Pagoda is the Great Lecture Hall. This one-story building was built in 990 after the original structure was destroyed by a fire. The lecture hall enshrines a seated statue of Yakushi Nyorai flanked by two bodhisattvas, Nikko and Gakko.

East of the Kondo is the Gallery of Temple Treasures, which is a recent addition completed in 1998. The two buildings contain important Buddhist relics, including Yumetagai Kannon, portraits of Prince Shotoku, a Kudara Kannon statue, ancient masks, and more.

Yumedono, located in the Eastern Precinct, is an easily recognizable octagon-shaped structure dedicated to Prince Shotoku. The building is home to a life-sized, gold-foiled statue of Prince Shotoku called Kuse Kannon. This mysterious statue was wrapped in silk and hidden for centuries to preserve its power of saving people from suffering. However in 1884, the statue was unveiled, and is now open to the public twice a year in spring and autumn.

Take the Yamatoji Line from JR Nara Station to Horyuji Station (12-13 minutes). From Horyuji Station, the temple is about a 20-minute walk or a 5-minute bus ride via local bus number 72. Alternatively, you can take bus number 97 from JR Nara or Kintetsu Nara Station to Horyuji-mae bus stop (about one hour), which is a few minutes walk from the temple.

Horyu-ji Temple's Sai-in (Western) Precinct was established by Prince Shotoku (574-622) for the purpose of training Buddhi..

Among the hundreds of statues in Horyu-ji Temple, the most mysterious statue there might be Guze (Kuse) Kannon.

The Calmness of Hōryū-ji, Nara

Let the hundreds and hundreds of years of this sacred location refresh your soul... Hōryū-ji, a place not to miss if you visit..

A Visit to Horyuji

Nara's Horyuji Temple, with wooden buildings over 1,300-year-old, was the first World Heritage site in Japan.

Horyu-ji Temple in Ikaruga Town, Nara is famous for being the oldest wooden building in the world. Under the name of 'Buddhist..

Shinkun’s Place is a small but interesting restaurant with a twist that is popular with anyone wanting to see some dramatic co..

Mr Q is located on the ground floor of a bar that is located within a Showa era (1925-1989) arcade containing snack bars, ramen..

Yakushiji Temple is regarded as one of the oldest and most important temples in Japan, which is no surprise given its impressive status. The temple is..

Maximizing the Fun in Ikaruga-Cho

Ikaruga-cho is a town in Nara Prefecture. It’s most famous for Horyuji Temple, home of the world’s oldest wooden buildings.