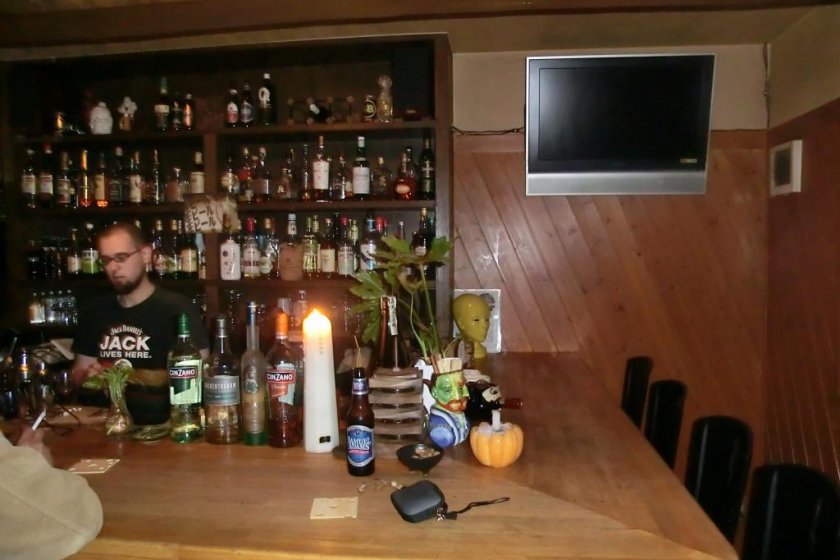 If you are ever in Saidaiji, are looking for some good music, stimulating conversation and have a passing interest in conceptual art then Mr Q’s bar in Saidaiji is definitely worth a look. Owned and run by UK expatriate Lee Walton, Mr Q is frequented by not only resident expat foreigners but also many Japanese, some who come to practice English, CEO, students, musicians, who enjoy bantering in Japanese or English with Lee who has an affable and easy going personality.

Fluent in both English and Japanese he is knowledgeable on the latest music trends and also plays in a band when he is not tending bar. He can serve you most kinds of drinks including cocktails, absinthe, bourbon, spirits and a wide variety of scotch whiskys. He also serves Japanese beer, shochu, Japanese sake (nihonshu). The food menu includes delicious homemade pizza, avocado salad, deep fried potatoes baked in their jackets, sausage and cheese platter, piping hot toasted cheese sandwiches and spring rolls. Personally I recommend the cheese platter or the pizza on taste and appearance alone.

Mr Q is located on the ground floor of a bar located within a Showa era (1925-1989) arcade containing “snack” bars, ramen restaurants and smoky jazz bars. If you head into Mr Q and go up the stairs to the second floor, Lee hosts a small space called Head Space where he also does much of his artwork, and on occasion rents the space out to visiting artists. From time to time, Lee hosts cultural events, such as art exhibitions, concert gigs, fashion shows etc that draw a strong following. One event earlier this year that was a joint design, music and art colloquium drew over five hundred people some of whom managed to stay up till up to 7am the next morning!

If you want to have a private gathering or a special event then Mr. Q is a perfect venue for a small sized party. There are about nine seats at the counter and up to ten people can be seated at the tables along the back wall. If you like sports, you can also watch international sporting events on the large flat screen television in the bar. On weekends the bar is usually crowded and its easy to strike up conversations even if you don’t speak any Japanese. There are usually a few foreigners around to strike up a conversation with as well as resident locals.

Last night was the annual Christmas party held at Mr Q. There were probably about 40 people in attendance and there was also a DJ. Some people came along dressed up in "cosupure" or Costume Play, including a police woman, a princess and a clown. Things kicked off around 8 pm and were still going well past midnight. I had the chance to meet up with a lot of new people, including Japanese. One guy was an Englishman, a potter with a long grey beard who had lived in Japan for over 30 years and had his own gallery in Nara. 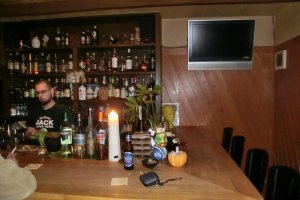 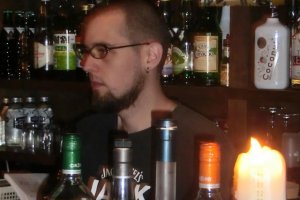 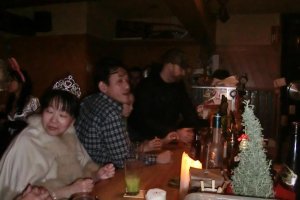