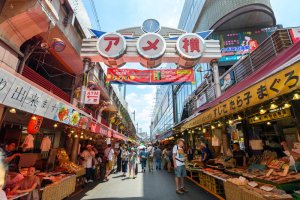 Ameya-Yokocho is an extremely busy street market that runs along the railway line between JR Ueno Station and Okachimachi Station. There are many small retail stores on this street selling seafood, fruits and vegetables, general supplies, as well as shops for discount clothing, accessories, cosmetics, watches and confectionery, as well as a large number of stalls selling street food snacks, as well as inexpensive restaurants, cafes and bars.

Originally, the area that is now called Ameya-Yokocho was an inner-city residential area with many wooden houses crowded together. However, during the previous war, the entire area was burned to the ground in a bombing raid. Reconstruction began immediately after the war and a number of shops and street stalls sprang up in the area.

Ameyoko is a bustling market street with stalls selling everything you could possibly want, and more.

The former black market, opened after World War II has become an interesting, complete, unique, and cheap market to visit in Tokyo...

Once you notice a little temple right in the middle of a busy shopping street, you won't be able to help walking in.

The Donburi of Ameyoko Street

Ameyoko is famous for food with a great variety of street food and restaurants to choose from. Here are a few well-known recommendations..

The Ueno Park (Ueno Koen) in the Taito district of Tokyo is a public park and with more than 10 million visitors annually the most popular city park..