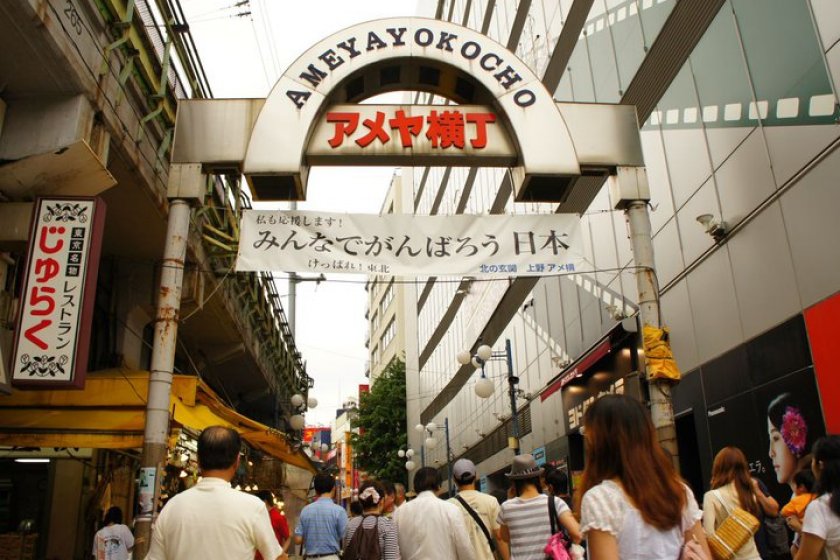 If Aladdin’s Cave were to materialise in Tokyo, I imagine it would look rather like Ameyoko (Ameya Yokochō to give it its full name). On this bustling market street next to Ueno Station you can find every clothing, food, jewellery or beauty product you could ever require, and a few you probably didn’t realise you needed until you saw them. And if the main street isn’t enough, duck into one of the shops and keep going towards the back, where another warren of stalls unfolds, Narnia-like, under the railway tracks. I am unable to wander through Ameyoko and emerge empty-handed – no matter how resolute I am in my decision not to spend any money, something always catches my eye and I find myself parted from my cash…again.

Ameyoko’s name comes from two roots. Ameya Yokochō literally translates as ‘sweet-shop alley’ – sweets are what the area was traditionally known for selling. ‘Ame’ is also a shortened form of America, so used because this area was where, in the years following World War II, a black market selling American products sprang up. Today’s market stalls sell legal goods and, although there are sweets and American items still to be found, the majority of the products are imports from China, or home grown in Japan.

There are several food outlets sandwiched in between the market stalls so you can fortify yourself with dim sum, doner kebab or ramen for around 500 yen each. Or why not buy a few snacks and take them to Ueno Park to sit by the lotus lake and have a picnic? Then spend the afternoon in Tokyo National Museum, to experience a totally different side of Japanese culture.

Most enjoyable in the alleys of Ameyoko is having a chat with the guys who run the fruit and vegetable stalls. Beware though, they are persuasive in their sales tactics (which largely consist of putting items in your hands while yelling ‘yasui-yo’ – ‘it’s cheap!’ – repeatedly). I recently went to take some photos for this article as the weather was nicer than it had been on my previous visits. I returned home with several photos, 20 tiger prawns, a kilo of mushrooms, some dried and salted fish, and a piece of ginger root the size of a small tree. You have been warned!

Still, cooking after a trip to Ameyoko is an experience in itself…

Find out more about Ameyoko. 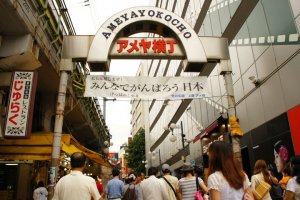 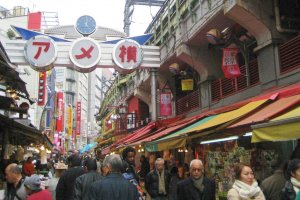 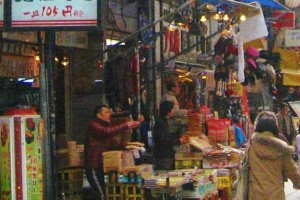