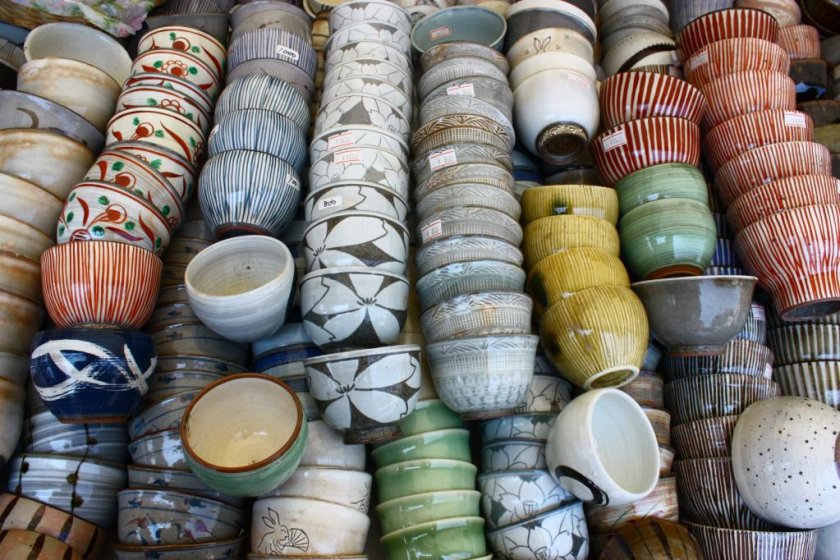 Browse the numerous stalls for that perfect bargain

There are thousands of ceramic items on sale, from cheap tea cups to large expensive vases and decorative plates.

Located in western Saga prefecture, Arita is a small town of white-walled 1930s buildings and picturesque narrow streets. Surrounded by mountains and forest, it is a sleepy place with a population of just over twenty thousand. Every spring, however, its usual tranquility is briefly disrupted when the town plays host to the massive Arita Ceramic Fair, which attracts up to a million visitors over the course of a week. So, what exactly makes Arita such an important centre for ceramics?

In the late sixteenth century, Toyotomi Hideyoshi, the ‘great unifier’ of Japan, attempted to increase his power by invading Korea. Although this mission was not a success, one result was that many Koreans were taken prisoner, with some forcibly relocated in Japan.

Ri Sampei was a skilled Korean potter brought to Kyushu at this time. He settled in Arita, where he discovered clay suitable for making porcelain. He is now widely considered to be the father of Japanese porcelain production, and there is a monument commemorating him in Arita’s Toyama-Jinja shrine.

Japan isolated itself from the rest of the world during the Edo period (1603-1868), choosing to trade with just three nations: China, Korea and the Netherlands. Porcelain produced in Arita was exported to Europe by the Dutch East India Company, where it became very popular during the seventeenth and eighteenth centuries.

Although Arita was the heart of the Japanese ceramics industry, the exported porcelain was shipped from the nearby port town of Imari. As a result, the porcelain produced in Arita became widely known as Imari ware. Imari ware is typically underglazed with cobalt blue and overglazed with gold and red, although a blue and white style is also common.

The kilns of Arita have been producing ceramics continuously since the seventeenth century. In 1977, Arita’s porcelain was designated a traditional handicraft of Japan.

During the Arita Ceramic Fair, more than 550 shops and stalls line the 4km long main street, all selling the famous ceramics at often heavily discounted prices. There are thousands of items on display, ranging from hashioki (chopstick rests) and small tea cups to huge elaborately-decorated vases. Prices start at just 100 yen and go up to tens of thousands of yen.

As you battle your way along the street, you might notice some people wearing white gloves, traditionally used for outdoor work such as gardening. Some of the stalls even sell these gloves, for those who forget to bring them from home. The keenest shoppers wear them so that, whilst rummaging through crate after crate of ceramics, they can easily wipe away any dust and grime as they search for that hidden bargain.

If you feel a bit overwhelmed by the seemingly endless ceramic-laden tables and crowds of people, there are also various stalls selling typical festival food like yakisoba, fried chicken and shaved ice. Buy a snack and take some time out to just sit back on a bench and people-watch, before plunging back into the throng. With your batteries recharged, perhaps you'll even want to invest in a pair of gloves for yourself!

The town of Arita, the birthplace of porcelain in Japan, holds an annual ceramics fair during Golden Week. 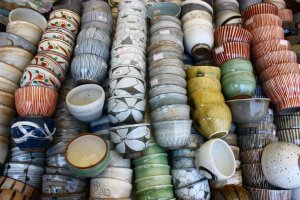 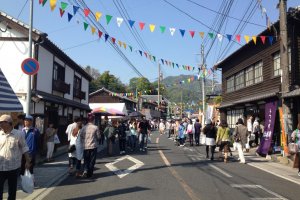 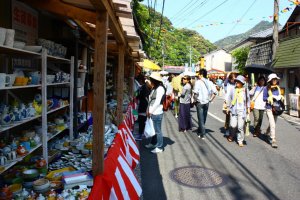 Kim 4 years ago
Can't wait to stock up on some pottery and ceramics when I'm in Arita - looks like there's loads of amazing stuff to choose from!
Reply Show all 0 replies
1 comment in total