Thousands of cherry trees at this top-rated spot

Saga's Ogi Park is a picturesque spot to visit during spring when the cherry blossoms are in bloom - there are approximately 3000 of them on the grounds, so there's definitely no shortage of beauty to enjoy! The park has been designated as one of Japan's Top 100 sakura viewing spots, and for the history buffs out there, it has also been selected as one of the Top 100 Historical Parks in Japan (this is a country that likes lists!).

The best time to catch the cherry blossoms in bloom here tends to be from around late-March to early-April. If you can't make it to the park during sakura season, it's also known for azaleas and wisteria a little later in spring.

Ogi Park is located just five minutes on foot from Ogi Station, which is served by the JR Karatsu Line.

For those who plan to drive, there is free on-site parking available, but it does tend to fill up quickly during the peak sakura season. Using public transport when possible is highly advisable. 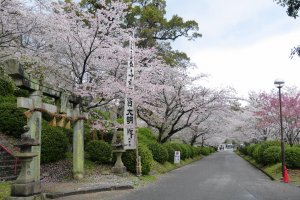