Every sweet cinnabon must be in want of good coffee.

If you're like me, you have probably been wondering where you can get a big, ooey-gooey, dripping-with-icing-and-bursting-with-amazing-cinnamon-y-goodness cinnamon roll in Japan. What's that? You're not that obsessed with cinnamon rolls? Well, you should be! Believed to have originated in Sweden, the cinnamon roll, also called cinnamon bun, has enjoyed a long history as a breakfast favorite in many parts of North America and Northern Europe. The cinnamon roll is, of course, not new to Japan—Japanese bakeries make a host of different varieties—but it is harder to find cinnamon rolls of the gooey variety mentioned previously. But never fear! Whether you've been wondering or not, you need look no farther than Cinnabon for the answer to your (okay, my) prayers.

The American-based chain first hit Japanese shores in 1999. It enjoyed significant popularity for a time; however, for various reasons, the company closed its last Japan branch in 2009. Down, but not out, Cinnabon eventually returned to Japan in 2012, opening a store in Roppongi. Now partnered with the coffee chain, Seattle's Best Coffee, Cinnabon seems to have found their niche. Because, really, who doesn't like a solid cup of coffee with a delicious sweet treat?

In the past three years, Cinnabon/Seattle's Best Coffee have steadily expanded, opening stores in Harajuku and Tamagawa, and takeout stands in Haneda Airport and Tokyo Station (only open until Sept. 8). Now, the chain has finally come to Saitama, opening a beautiful new store in Saitama-Shintoshin's Cocoon City last month. The store seats 20, and is located right in the middle of the shopping center, making it a great place to take a break from shopping. As you relax, you can watch the staff make the cinnabons from scratch through a big window, a hallmark of all Cinnabon stores. Expect lines, but don't be deterred by them as they often move quickly.

Their menu differs slightly from their American counterparts, offering a smaller selection of items. The main 'bons, Classic and Pecan, come in regular and mini sizes, with the Chocobon only offered in the mini size. (Regular 'bons start at ¥420, minis at ¥300.) There are a few other sweet treats on their menu like Cinna Bites, bite-sized cinnamon rolls, and Cinnabon Stix, cinnamon-covered pie sticks you can dip in cream cheese frosting. You can choose from a plethora of beverages—caffeinated and non-, hot and cold—to wash down your cinnamon treat. If you don't have time (or there's no space in the café) to chow down on your cinnabons immediately, grab a CinnaPack, a box of premade cinnabons that you can heat and eat at home or freeze to eat later. Just be careful not to eat all of those cinnabons in one night.

Take JR Keihin-Tohoku Line, Utsonomiya Line, or Takasaki Line to Saitama-shintoshin Station. Cocoon City is a short walk from the east exit. Follow signs to Cocoon 2. Cinnabon is located on the first floor.

Hello, fellow (I hope) Japan lovers!  Maybe the first relelvant thing you need to know about me is that I love Japan. Japan is a unique place where high-tech, ultramodern culture and old, historic tradition flawlessly co-exist and intermingle. It's a magical place, and I feel like I'm always finding cool, new things, even in places I've been a hundred times, so I'm very excited to share these with you. My favorite thing about Japan is probably the food, then the culture, then the public transportation system (seriously, it's amazing!), but really, I love it all! In my free time, I enjoy writing, reading, watching anime, and getting lost in the city. I have a passion for photography, traveling, and — have I mentioned it already? — food. I'm based in Saitama, but honestly, I'm all over the place, so buckle in! It's gonna be a fun ride! ~ Please feel free to contact me with any questions, suggestions, or ideas for future articles. ~ Yoroshiku ne! ^_~ –☆ 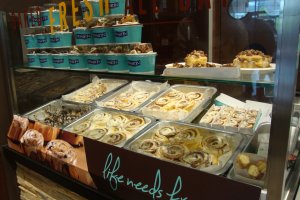 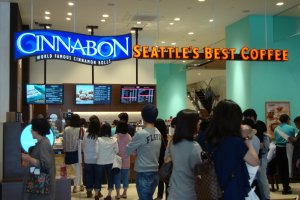 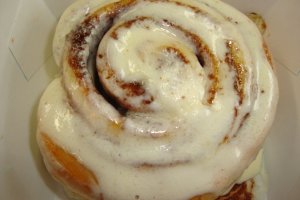 Sherilyn Siy 5 years ago
Is it less sweet than the US Cinnabon? It would be nice if they lessened the sweetness for Japanese taste. I find the US Cinnabon too sweet.
Reply Show all 1 replies

Loren Hinton Author 5 years ago
Hi Sherilyn, sorry for the late reply. I haven't had a US Cinnabon in maybe 8 or 9 years, so I can't say with certainty. I can say they are definitely sweet compared to Japanese sweets. Sorry I can't be more helpful!
Reply

Olga 5 years ago
Yummy! I love the smell of Cinnabon rolls and always try to walk past their shop in Tokyo!
Reply Show all 1 replies

Loren Hinton Author 5 years ago
Me too! Smells so yummy!
Reply
4 comments in total