Japan has nearly 1,700 National Historic Sites with about 50 of them located in Tokyo. These sites encompass gardens, castle remains, graves, archaeological sites and much more. Just visiting all these sites could keep you busy for a few days, but the reality is that some of them are rather boring. After all, the remains of a moat are just that – remains – and staring at old rocks and bit of tepid water doesn’t get the exploratory juices flowing.

Getting out of Tokyo opens up a few more possibilities. One place we recently visited is Yoshimi Hyakuana, which is located about 50 km north of Tokyo in Saitama Prefecture. In Japanese it’s also called Hyakuketsu. The name, in either case, means 100 holes. The site is a large mound of tombs that were built into the rock during the Jomon era, about 1,400 years ago. There are actually 219 of these tombs that have been confirmed so far. Steps lead visitors up and around to many of the tombs and it’s possible to go inside to see the stone beds where the long-ago deceased were laid to rest. Who knows, you might even get to say hello to the ghost of one of these ancient people.

The complex also includes a workroom where you can learn to make 'Haniwa' figures. You’ve probably seen these brownish-orange figurines in shops. The most common figures are horses or samurai, but we saw a few in the shape of cartoon characters and small animals, so you are free to make what you like.

There is also a room with a few photos and some posters explaining more about the tombs, including an explanation of how the military excavated the mountain to build wartime factories. These posters are only in Japanese, but the Google Translate app on smartphones gives a pretty good translation when you use the camera function.

There are snack and gift shops on these grounds as well, but we decided to eat at the soba restaurant just across from the site’s entrance. This turned out to be a good choice as the 'jigona soba' (local flour soba), was pretty good and very reasonably priced.

While in the vicinity you can visit Mt. Iwadono Anraku Temple (Yoshimi Kannon Temple), which has a three storied pagoda and several other cultural properties.

Ponpon Mountain, which is close to Takaohikone Shrine, emits a Pon Pon sound when you stomp your foot, hence the mountain’s name.

Cycling is also a popular activity as Yoshimi-machi has a number of cycling trails from flat to hilly. Walking and hiking trails are also available. One such trail, the 3.5 km “Road of Wishes”, which runs between Iwamura Kanno Temple and Yoshimi Kannon Temple, is considered an auspicious trail that makes wishes come true. The road is lined with Jizo status (guardians), and several temples.

The Yoshimi area is also well known for its delicious strawberries, which at the time of this writing (March), are in season. Leaving the 'Hyakkuana wo Ichigo-no-Sato Yoshimi', a michi-no-eki (roadside station), to buy fresh strawberries and locally grown vegetables at the weekend farmers’ market. The vegetables and fruit are fresh and they are much cheaper than Tokyo prices. This plaza has a popular strawberry-themed play area for the smaller kids and has stalls selling a variety of food in the open plaza area. There are also shops where you can eat jigona udon, (local flour noodles).

When you arrive at the Hyakuana Tombs be sure to pick up an English or Japanese language brochure for a list of sites, shops and a large map of the area.

By car: Take the Kanetsu Expressway to the Higashimatsuyama exit and turn towards Konosu. Best to follow you GPS on your car's system or your phone.

By train: Take the Tobu Tojo Line to Higashimatsuyama Station then the Kawagoe Tour Bus (from the license center) for about 5 minutes to the Hyakuana Iriguchi bus stop. 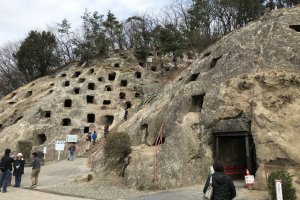 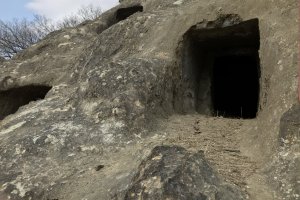 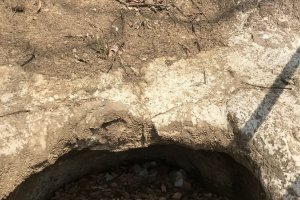 Cathy Cawood 2 years ago
Looks like an interesting place!
Reply Show all 1 replies

Joe Peters Author 2 years ago
It is - and something different from the usual tourist spots - give it a go if you have a chance.
Reply

Elizabeth S 2 years ago
This looks like a great day trip place for a family. It’s especially appealing if you’ve got young Indy Jones types in your family. And who doesn’t like produce?
Reply Show all 1 replies

Joe Peters Author 2 years ago
Most definitely, for those young explorers in your family. Hope you get a chance to go.
Reply
4 comments in total