After accumulating some considerable wealth from his various mines which were all located over central Japan, he felt the need to give back to the community. Because of this, Hori started some projects such as building an elementary school in the area, giving financial aid to disaster victims and building a hospital that could provide low cost medical services. After the first hospital, he built several other facilities including 3 branch hospitals in 1920.

Even through troubled times, especially during 1931 when it was sold, this hospital still served the local community until as recently as 1984. In 2005 it was listed as a Government Designated Important Sight and also an Important Tangible Cultural Asset. It was reopened in 2016 as a museum and restaurant.

Buildings and the hospital garden

The main building was sold to the Shimane Prefecture Agriculture Association and moved to Kanoashi district Tsuwano Hospital in 1946. The museum and exhibition today is in the beautifully renovated new wing of the Hatagasako hospital built in 1917. The outlines of the old building’s foundation still can be seen on these premises.

A small hospital garden was created with Chinese parasol trees (considered to be medicine), and the flower beds are surrounded with bricks made of slag (the byproduct of the copper mining). Another Chinese plant which can be found within these gardens is a Chameleon, (Houttuynia cordata) which is also used in traditional medicine.

The former hospital has permanent exhibitions and some temporary events and exhibitions. The history of this hospital is explained where the early Showa period atmosphere is reconstructed with many furniture and medical tools taken from this hospital as well as some additional pieces from other collections.

The exhibition consists of an examination room for outpatients along with a surgery and operating room as well as a medicine and bacteria examination room. There is also a gallery for events. The hospital was also one of the first places in Shimane prefecture to have an X-ray machine, installed in 1919. This important medical machine was given to the Japanese military during the Second World War. The room this was placed in is also part of the exhibition.

There is also a working restaurant in the former hospital (called Katei). The dishes served in the hospital are focused on the topic of health and local culinary culture or rather, locally grown vegetables, (meat is usually not on the menu). The restaurant also conducts local food culture research and holds several activities.

The Hatagasako former hospital is a quiet and peaceful place, and one reason for it is its accessibility, or the lack of it.
It is 10 km from the Tsuwano Station and while it is a bit uphill, there are some who visit it with rented bicycles.
There is also a bus service to the area, but only a few times a day. For more details about the bus schedule, please contact the Tourism Association of Tsuwano at tsuwanok@tsuwano.net. 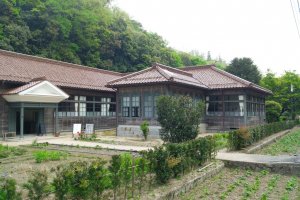 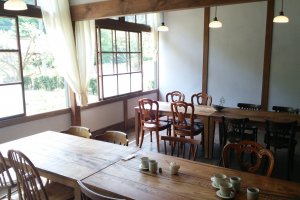 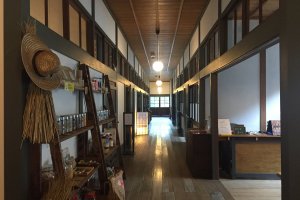