The only remaining horse archery range in Japan

The Washibara Hachimangu Shrine is one of the oldest buildings in the old castle town of Tsuwano. It is located upstream along the Tsuwano river, where the castle hill meets the river's apex. The horse archery grounds at the shrine is the only purpose-built riding grounds for archery remaining in Japan, and is where the Tsuwano Yabusame Horse Archery festival is held every April.

At first glance, one might not see too much to warrant the journey, but visiting the shrine in person can uncover its unique, rural Kyoto-esque atmosphere. To walk over the very grounds that horse-riding samurai must have covered for the past 500 hundred years creates a strong impression, and you can begin to see why the Tsuwano locals have worked hard to tirelessly protect the shrine grounds – from structural deterioration and decay on one hand, and the threat of urban redevelopment on the other.

Whilst Tsuwano does not see the same crowds as Kyoto and Nara does, this perhaps reveals one of its charms. Visitors can walk along the embankment, past the three archery targets, surrounded by uninterrupted silence. It's like this no matter what the season – cherry blossom in the spring, the changing color of the fall foliage, scorching heat in the summer and a blanket white canvas in winter.

A glance at the old shrine building, and the cedar tree jutting out of the tree line behind the shrine, is history itself, for these two landmarks have been aligned like this for centuries now. Except for the electricity wire, a photo taken from the right angle is a window to the past. One could say that there is nothing here but an old shrine building and an old tree, but knowing the story behind this sacred place and having the silent beautiful nature around, with no flocks of tourists to break the idyll, gives an unexpected feeling of tranquility.

The shrine was built by the Yoshimi clan in the 14th century together with the training grounds. Later, a second shrine (together with a torii gate) was also relocated on these holy grounds, when the Kamei clan took over Tsuwano at the beginning of the Edo period (1600–1868). This second shrine followed the Kamei family to Tokyo, when the feudal Edo period was over, and they lost their position as domain lord.

The main shrine building and path leading up to it is diagonal to the tracks, but the reason why is unknown – even to the locals. There are many smaller shrines which were moved to Washibara Hachimangu in the 20th century, when depopulation left some places without caretakers. During the development boom there were plans to widen the road, knocking down the stone lantern, and turn the riding grounds into housing lots, but Tsuwano locals proudly stood up to protect Washibara Hachimangu and its surroundings. Outside the festival season, Tsuwano collaborates with the longest-standing horse archery family in Japan to keep the ground in use, helping preserve its heritage.

The Washibara Hachimangu Shrine is about a 40 minute walk from the train station, and about 25 minutes from the centre of the old town. Bicycle, minibus (Road Station Nagomi) or taxi is recommended. One route is to ride/walk along the river upstream on the right-hand side of the river, which continues over the dam of the river. 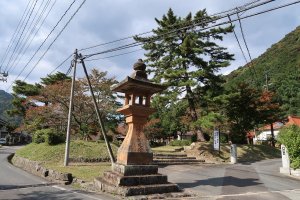 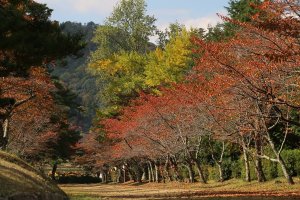 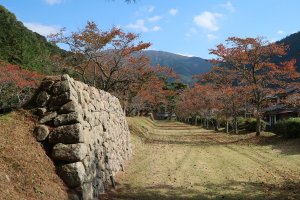 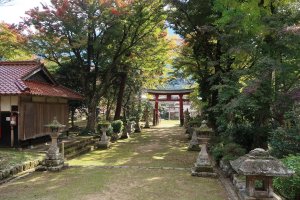 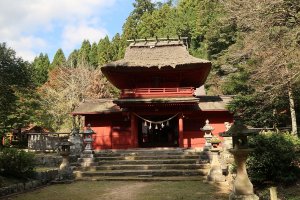 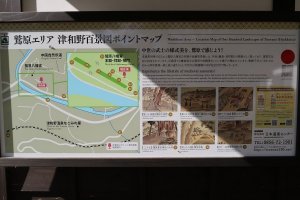