Relax and enjoy at this destination hotel in west Izu

West Izu boasts little sightseeing, to be honest; it's best known for its hot springs and scuba diving, as a place where people come to relax and take in the ocean scenery. To that end, many of the hotels are destinations in their own right, with facilities to make a stay fun enough that you don't need to leave, and Itoen Hotel provides exactly that.

A little way south of the centre of town, it's an imposing seafront edifice, with most of the rooms providing handsome views of the ocean. (Not mine, though; I chose one of the cheaper, very basic single rooms, with a misleadingly described 'mountain view' which was an extreme close-up of a hillside.) You can also enjoy a vista of the sea from the spacious lounge near the lobby, and from the hot spring baths that are the main attraction here.

Check in: the staff speak a little English, and the check-in procedure was smooth and fast.

Sightseeing: this didn't take long, partly because I was pressed for time, partly because there just isn't a lot to see in the town. I skipped the gold mine, but did find a couple of nice Buddhist temples, Seiun-ji and Anraku-ji.

Bath: I took my time over this, alternating between the sauna and hot spring bath, looking out over the blue ocean.

Dinner: I chose to include the buffet dinner, and I was very glad I did! The large dining room has a fun, lively convivial atmosphere, with many of the guests in their hotel yukata. There's a whole wide range of Japanese food on the buffet, like an izakaya menu writ large: ramen, udon and tempura, sashimi and sushi, Korean chijimi pancakes, curry rice, salad, deep-fried goodies and meat on skewers, then ice cream or cakes for dessert. And there's all-you-can-drink alcohol, with beer, tasty local orange and 'bay berry' liqueurs, and pumps to refill your sake flasks.

Breakfast: I also included the buffet breakfast, which was just as good and varied as the dinner, with a great variety of Japanese and western style breakfast foods. My one niggle here was that they didn't provide proper juice, giving us rather 'juice drinks' and soft drinks from a vending machine.

Unfortunately, at the time I traveled I was suffering from a virus and consequently exhausted, so I couldn't enjoy everything they had to offer (but I did appreciate the generous 12:00pm checkout). This was disappointing, because they have plenty of low-key but light-hearted ways to entertain yourselves: pool tables, table-tennis, a games room with air hockey, slot machines and pachinko, even a few karaoke rooms. If you're somehow not full after dinner, you can add fuel from the vending machines in the hotel, with soft drinks, cigarettes and rather overpriced beer.

As I said, I went for one of the very basic single rooms: I did have a TV and fridge, but no desk, bath or shower. They also have Japanese-style rooms with tatami floors and futons, and western-style triple rooms: from the floor plan it looks like some of the rooms have private baths on balconies overlooking the sea.

Finally, before you leave, you can buy your souvenirs from a well-stocked shop near reception: they have plenty of goods made with local honey, oranges and wasabi, among them cakes, snacks, soaps and shampoos.

The hotel is a few minutes' walk south of central Toi; it's immediately next to the Torizaki bus stop, on the bus route between Shuzenji and Matsuzaki. If you're coming from the west, there are ferries to Toi from Shimizu, not far from Shizuoka City. 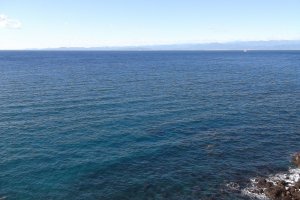 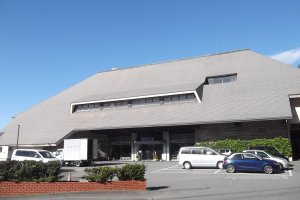 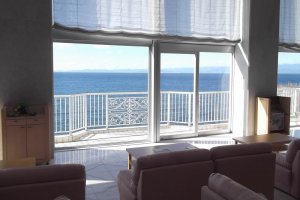 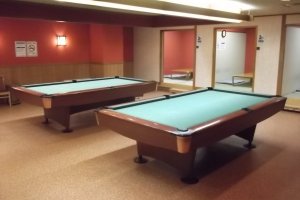 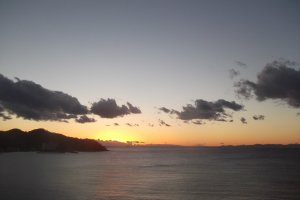 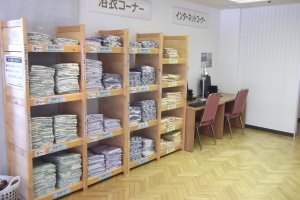 Elizabeth S 2 years ago
I hope your stay helped you recover.

I stayed at a few onsen hotels in Shizuoka. The late checkout time means you can really take your time in the baths. These hotels are really all about the sumptuous dinners and breakfasts, views and hot spring waters. Great for unwinding.
Reply Show all 1 replies

Peter Sidell Author 2 years ago
Thank you! I would like to stay again when I'm not sick, so I can enjoy everything fully, especially the dinner and breakfast.
Reply

Bonson Lam 2 years ago
I am sorry to hear that you were sick, but hopefully the sunshine and the views brightened your stay. If the view from the car park is that glorious, I can imagine how spectacular the rest of the resort is like. I think some of that old school charm is just want I need to refresh and rejuvenate myself after a very intense year.
Reply Show all 1 replies

Peter Sidell Author 2 years ago
Thank you! Old school is exactly right, the hotel feels like it was built during the bubble economy to cater to families and company group trips. A fun place to stay, especially if you're healthy!
Reply
4 comments in total