For most of the year, Mamada, Tochigi Prefecture, is just your typical sleepy small town. There's an art museum and a local history museum, but otherwise not much reason to get off the train here. Unless it's the 5th of May (Kodomo-no-hi, Children's Day), when the annual Mamada no Jagamaita festival is held, one of the more unique matsuri in the Kanto area.

Origins of the Mamada no Jagamaita

The festival revolves around seven large snakes with dragon heads (but don't call them dragons though!), made by junior high school students from different neighborhoods of Mamada. The snakes are about 15 meters long and mostly made from bamboo and straw. On the day of the festival they are covered with fern leaves. I don't know the weight of the snake, but as I can tell from my own experience, even when carried around by so many people, it is still pretty darn heavy.

The festival is held as a prayer for rain and protection from plague to help ensure a good rice harvest. It is thought to date back over 400 years, though the exact origins are uncertain. In its current form it is believed to have started during the Meiji era, although it wasn't until the Showa era that the snakes that are carried around started growing to their current size.

During the festival day

In the morning, all seven snakes are carried from their neighborhoods to gather at the Mamada Hachiman Park surrounding the Hachimangu shrine. From about 10am the snakes (and a few smaller ones) are on display in the park, where there are also taiko performances and a few yatai stalls. If you want a good spot for the main event, you might want to ignore all of that, as it will get very busy and spots with a good view are rather limited.

The main event starts at noon, when the snakes are first carried to the Hachimangu shrine to receive a blessing (and some sake...) from the priest. Next is what is considered the highlight of the festival, the "Mizunomi". Even after the sake, the snake is still thirsty, and to quench that thirst it is carried into the pond to have a drink. It seems all of the groups try to outdo each other in making a spectacle out of this moment.

After the snakes have had their fill, the park activities are mostly over and the yatai dismantled. The festival itself is far from over though. Each snake returns to their own neighborhood, moving around most of the afternoon to thank the locals with a small ceremony at their homes. This lasts for a few hours, obviously involving quite a few breaks for a drink, something to eat and a moment of rest. It probably helped that I was one of the very few non-Japanese around, but these moments were a lot of fun and the group I was following insisted that I help carry the snake for a bit. One other detail I noticed was how the group had two ladies following the snake, picking up even the tiniest bit of fern that fell off. As they say, only in Japan...

Late in the afternoon, some of the snakes gather in front of Oyama Shiritsu Mamada Elementary School for the final and most chaotic event: "Hebi mo mi". Groups with the snakes will go circling around the school grounds a couple of times, trying to get their snake on top of the other ones. While it might start off calm, it doesn't take long before everyone is running around like crazy. The combination of heavy snakes, fatigue and quite a bit of alcohol can make this part a bit dangerous, proven by the two times an ambulance was needed during my visit....

And then, just like that, it's all over. The snakes are carried back to their home base, and they bring out a chainsaw. The head remains but the rest of the snake is quickly cut into pieces and disposed of. And again: not a single fern leaf or the tiniest bit of straw will be left on the streets...

The easiest way is to take the JR Utsunomiya Line from Tokyo or Ueno stations to Mamada Station. A one way trip takes 75 minutes and costs JPY1,340. Taxis and buses are infrequent from the station so it's simple easier to walk along the Nikko Kaido Road to Mamada Hachiman Park.

Unfortunately living far away from Japan in The Netherlands, ever since my first visit to Japan in 2008 the country has become a bit of an obsession to me. As of 2020, I've visited Japan 16 times (and actually have been to a few other countries also!), but there's still so much more to discover! I love matsuri, Japanese food (including the weird stuff....), anything concerning railways, cars, anime and manga, but also just all of the little surprises Japan has to offer. 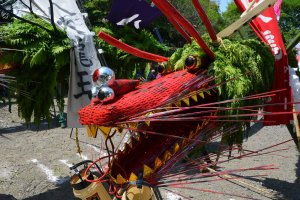 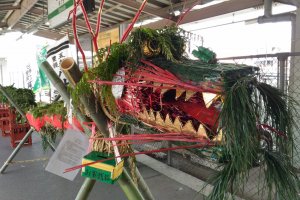 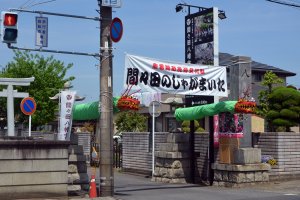 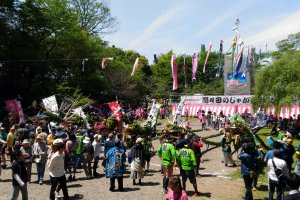 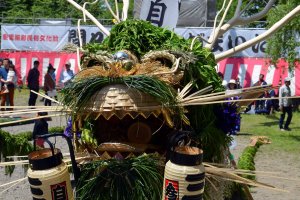 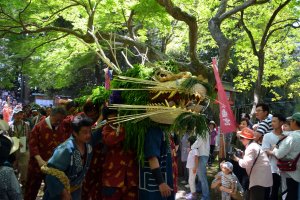 Kim B 2 weeks ago
Ah, Japan! Loved that you mentioned no remnants will be left on the streets - cleanliness and respect at its finest. Looks like a really fun festival!
Reply Show all 1 replies

Sander van Werkhoven Author 2 weeks ago
It seemed like just a minor detail, but whenever we have any kind of event over here, the streets are a mess for weeks. It really shows this is a local festival mostly for local people who actually care about their neighborhood.
Reply

Elizabeth S 2 weeks ago
Wow, what a cool festival. Your photos tell the tale.
Reply Show all 1 replies

Sander van Werkhoven Author 2 weeks ago
Thanks! But no matter how cool the festival was, that day actually was so darn hot I seriously considered leaving even before everything got started. Looking back now, I'm so glad I stayed until the very end. Of all of the matsuri I've been, this one ranks pretty high!
Reply

Elizabeth S 2 weeks ago
Wow, what a cool festival. Your photos tell the tale.
Reply Show all 0 replies

Sleiman Azizi 2 weeks ago
It's great to see you publish some of your experiences here!
Reply Show all 3 replies

Sander van Werkhoven Author 2 weeks ago
Thanks! I already have some ideas for more content, either another matsuri (3 more just from my last trip...) or some other place I haven't seen here at JT. It's not only fun to share these experiences, but also gives me a good reason to finally take a look at the thousands of photos I've taken during those trips....
Reply
9 comments in total