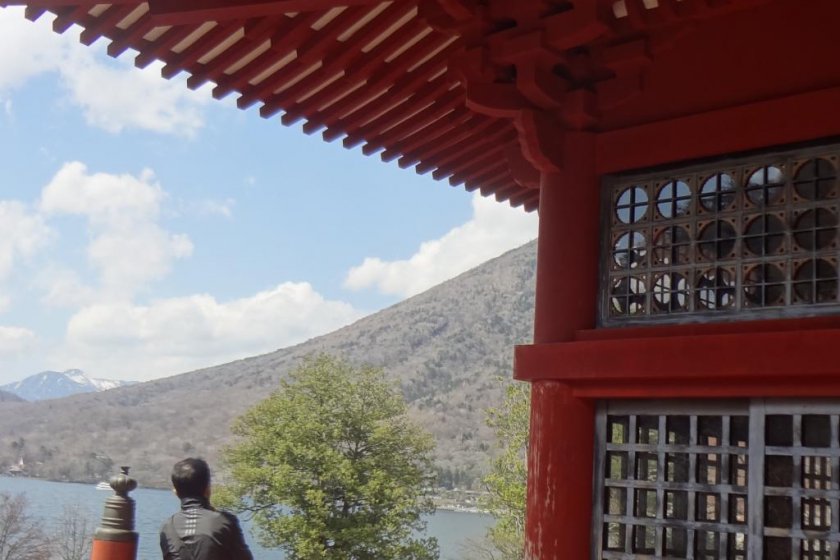 And its large wooden statue rooted deep in the earth

When you leave the building, you will find yourself with a great view from the outside corridor.

Chuzen-ji (中禅寺) is an old temple standing on the east side of Chuzen-ji Lake. It’s famous for a unique wooden Buddha statue and the wonderful panorama view from the temple building.

The precincts of the temple

Chuzen-ji is about a 15-minute walk from Chuzen-ji bus terminal near Kegon-no-taki Falls. Go toward the lake and turn left when you reach the lake. This is just before the giant red shrine gate that straddles the road. You can enjoy a nice stroll along the lake before reaching the temple. There are many restaurants, souvenir shops and handcraft shops along the way.

Passing through the gate of the temple, you’ll see a building housing a bell on the right. You can climb up into it and ring the bell. The inside is very dark and narrow. Go up the steep steps carefully, and you’ll reach a loft where the copper bell is. But be careful again, the ceiling is very low. Pray for something and ring the bell three times. From the loft, you can see the lake and a beautiful mountain range beyond it.

The statues in the temple

The two main statues of this temple sit inside the main building. At the entrance, a priest waits to greet visitors who want to tour the inner rooms of the temple. The first room houses a famous wooden statue called Tachi-ki-kannon (立木観音). This statue of a Buddha with many arms and many faces on its head was carved by Shodo from a very bigkatsura tree. The entire statue, from head to foot, was carved out of the trunk of the tree, and its 48 arms were carved from the tree’s branches. The surprising thing is that the root of the original tree is still in the ground. The statue is literally rooted in the earth.

Next, the priest will lead you to the upper floor. Going up the stairs, other statues are waiting. The statue on the right is Hashiri-Daikoku-ten. The direct translation of it is “Daikoku-ten running on the waves.” There is an interesting story about it (please see below). The statue on the left is Shodo. There are five guardian deities in the middle. They helped Shodo open the temple.

When you look up at the ceiling you will see a black and white dragon. The dragon is believed to be a God related to water.

When you leave the building, you will find yourself with a great view from the outside corridor. Over the black tiled roof of the temple buildings, you can see Chuzen-ji Lake and the elegant lower south slope of Mt. Nantai.

This temple was built by Shodo (勝道上人) in 784. One day, Shodo received a divine revelation. As a result, he tried to reach the summit of Mt. Nantai again and again. But he failed repeatedly. At that time, Daikoku-ten (the God of wealth) appeared on Chuzen-ji Lake and was running toward Shodo on the surface of the lake. Daikoku-ten promised him success in reaching the summit in the very near future, and so Shodo finally succeeded. Then Shodo established Chuzen-ji at the foot of Mt. Nantai and offered up the statue modeled after Daikoku-ten to show his appreciation.

By the way, until 1872, women were forbidden to enter Chuzen-ji. All of the sacred places such as temples, shrines, and mountains were restricted to men in Japan. But when Japan opened its doors to the rest of the world, the doors of these places were also opened to women.

After diplomatic relations with various foreign countries was established, foreigners came to Japan and started to travel here. In 1867, British Minister Harry Parks and his wife climbed Mt. Fuji (a forbidden mountain for women and also for foreigners). Although the Japanese government permitted the Parks to climb Mt. Fuji as a special case, the floodgates were opened and Japanese people started to question why a foreign woman was permitted but not Japanese women.

Chuzenji Lake was named after Chuzen-ji Temple, but not so many people know that. Today the lake is much more famous than the temple. I hope you’ll visit Chuzen-ji Lake and put this charming temple on your list as well. 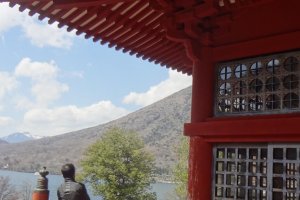 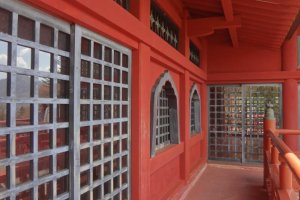 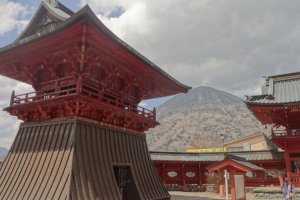 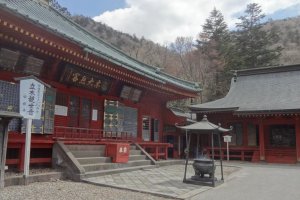 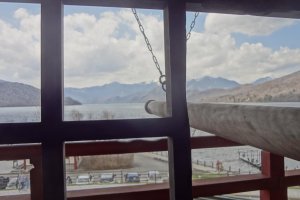