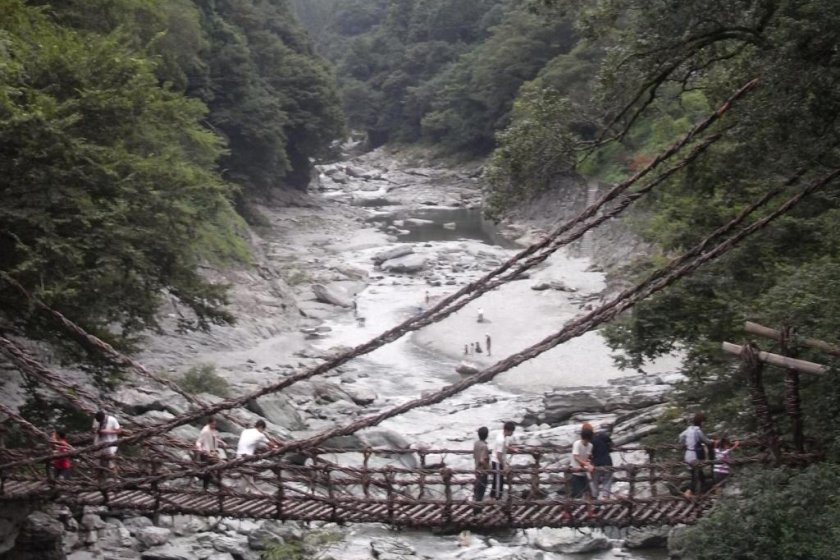 Iya Valley is true wild country in the west of Tokushima used in ancient times for defeated samurai to hide out from their enemies. These days it’s still very rugged, but quite accessible. Car is by far the best way to go. The valley snakes its way south through Miyoshi City, and, at many points, you’re driving along very narrow roads near the top with a sheer drop of two or three kilometres just outside the driver's door. Passing cars can be quite tricky along the road as it’s not wide enough for two cars the whole way.

There are a couple of observation decks built along the valley where you can stop and climb out and look down the valley. Even in the spring months there are low clouds and pockets of mist hanging around making for some spectacular photo opportunities. One these stops (though without a deck) is the Manikin Pis boy. Cemented to a rock jutting out over a two-kilometrer drop, he pees into the river below. Apparently, brave souls used to climb out on the ledge and do this to prove themselves. It seems to be good luck to throw coins at him, though I’m not sure how bad it is if your coin drops over the edge.

One of the other spectacular sights in the valley is the Iya-no-kazura-Bashi, or Kazura Vine Bridge, located just below the Yumi-Butai. There is ample parking, a restaurant, and a gift shop. Here you can buy local crafts and souvenirs as well as omiyage. Heading down to the bridge about one hundred meters are more tiny shops selling the usual array of awesome Japanese snacks and meals. The smell of coal-roasted fish will get the mouth watering.

The bridge is open from sunrise to sunset all year round and will cost you 500 yen to walk across. It’s not for the faint hearted as the gaps in the walkway are up to twenty centimetres; which means you have to look down to keep your footing. If you’re scared of heights, this is the worst thing you can do as you’ll constantly be looking down to the river below. Vine bridges were originally strung across the valley so a warrior could escape across cutring the bridge down so that nobody could follow him as he disappeared into the mountains. The bridge is still made of vines but is now reinforced by cables and regularly replaced for safety reasons.

Just nearby is a beautiful waterfall with a pool that some boys were swimming in. The water is cool and refreshing in the hotter months perfect for washing the sweat off. This pool then goes under the road into the river where you can climb down to the banks and walk around when the river is low. There is also a camping ground ten minutes walk from the bridge with bungalows and BBQ’s. It’s only open April to November, however. There are also some other sights to see down this way including the Heike museum of folklore, a school for learning how to make soba noodles, an old samurai residence and a couple of onsen--but more on those later.

I’m an Australian on a working holiday and have been here less then six months. I’m living in Awashi about 30k’s west of Tokushima city where my girlfriend is a English teacher. I plan on seeing as much of Japan as possible and soaking up all the culture I can. I’m a keen photographer/videographer and am currently studying a degree in journalism.I’m originally from Perth but now live in Melbourne so I’m not much looking forward to my first ‘real’ winter.For my photographic journey through Japan check out my blog Phillip Nelson photography. 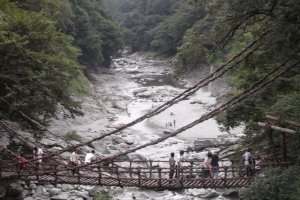 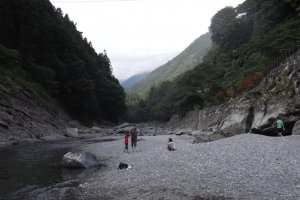 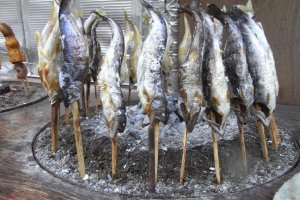 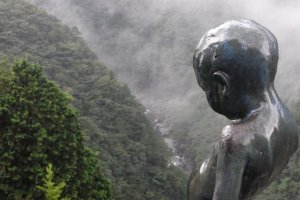 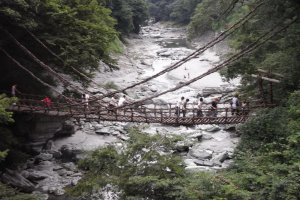 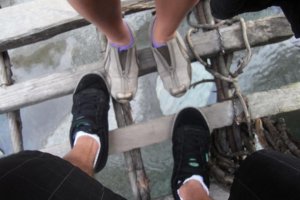 Phillip Nelson Author 10 years ago
Wouter stayed tuned for rafting through a canyon, hunting the elusive and magical tanunki, the best ramen in Japan and much much more. You'll want to move to Shikoku pretty soon.
Reply Show all 0 replies

Wouter Thielen 10 years ago
It sounds like a great adventure! I almost never hear anything about Shikoku, all Japanese people say it is boring, nothing there (except for the fine Udon), but this article gives a different image. I would love to go there!
Reply Show all 0 replies

Nate Hill 10 years ago
"If you’re scared of heights, this is the worst thing you can do". This is very true! It took my wife ten minutes to get across. Not only is it high, the bridge swings a lot. I had a great time, though!
Reply Show all 0 replies
3 comments in total