With a Visit to the Yoyogi Park WanWan (Doggy) Carnival

Visit any park in Japan – best an urban pocket-park, mid-morning – and you are likely to come upon a group of ladies confabbing around their baby strollers. The prams don’t contain infants (the uncommon Japanese woman who has one of those prefers to carry it against her chest, or on her back); the ladies in question are pushing pooches: poodles, schnauzers, yorkies, terriers, miniatures and toys, often more than one per buggy.

Don't take me wrong when I say this: Japan is going to the dogs. Arriving late to the confraternity of canine ownership (Japan’s postwar generation generally didn't own dogs) the rising sunners are now embracing the passion like no others on earth. When considering that Japan’s (human) population is predicted to shrink by close to 30% in the next thirty years (yes, you read that correctly, nose-diving from 127 million to well under 100 million) take solace; the void is going to be filled with poodles.

And they are going to be ridiculously cute poodles, at that. While Japan’s dwindling population of human children is still rigorously homogenized, uniformed in black and blue to the age of eighteen, canines suffer no such indoctrination. Japanese pups are groomed and coiffed, blinged and colorfully dressed (yes, I know that sounds absurd, but it’s true, dressed) in a celebration of creative and elitist individuality. The United States (where obnoxious big hair ladies feeding ‘hers’ cheetos on the couch got the dog grooming boom going years ago) now looks to Japan for canine styling guidance. They just do it better!

Invest in vets, and other pet services!

You might be a little bit late putting your money into Japan’s pet shop boom, but not the veterinary business – and here’s why. All those bright-eyed nippers being pushed around in prams are not getting the exercise they need, hence more and more are suffering from diabetes, gout, anemia and the like. And there are barely enough vets to supply all the needed insulin shots, blood transfusions and nutritional boosts. (I’m actually considering starting a dog walking/canine foreign language tutoring service in Tokyo, to supplement all the income I don't make from writing.)

For some focused dog watching

To learn all you could possibly want to know about stroller dogs you might want to attend the WanWan Carnival in Yoyogi Park. Pick up some dog snacks to take home for your pup. Have your dog’s teeth examined for free. Check out one heck of a fashion show. If you like dog-watching, as I confess I do, it’s a really good time.

Much better than sitting on your couch sharing a bag of cheetos with hers. 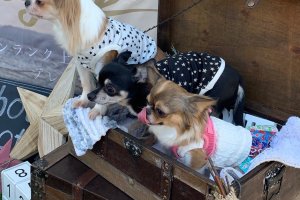 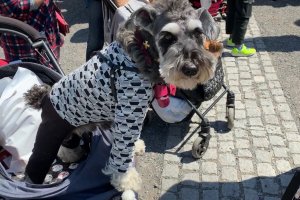 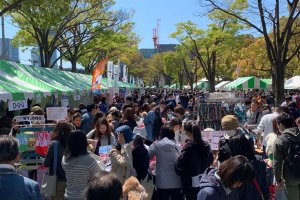 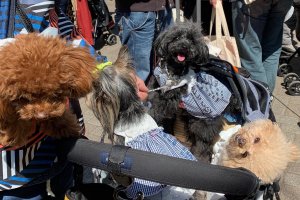 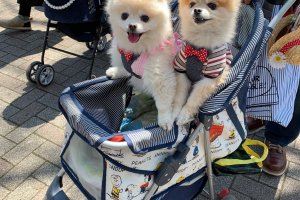 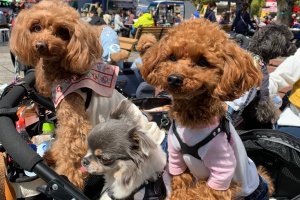 Scott Brause Author a year ago
Once upon a time I thought I would never own a small dog (here in California we have pit bulls, which actually have small dog brains), but a little one will be in my future when I move back to Tokyo. However, there will be no baby stroller, nor a tuxedo; that is not happening.
Reply Show all 0 replies

Kim a year ago
I was laughing at the captions on the photos - perfect! We have a shih tzu so maybe I’ll have to dress him up and take him along! When in Rome - or when in Tokyo - right?!
Reply Show all 2 replies

Sleiman Azizi a year ago
We have a shiba and ye gads, what a princess she is!
Reply

Kim a year ago
Haha it wouldn’t be Japan without a pampered pooch!
Reply

Sleiman Azizi a year ago
A thoroughly enjoyable read but I think I'll pass on this one. Cutesy dogs are... out of my zone...
Reply Show all 1 replies