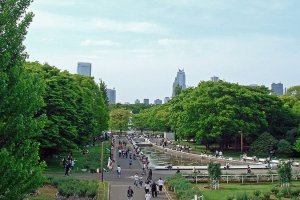 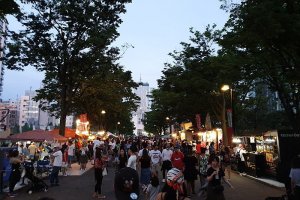 As one of the largest green spaces in Tokyo, Yoyogi Park is a magnet for Tokyo residents who want to enjoy the sun and nature or who would like to attend one of the many festivals that take place in the park all year round.

Although Yoyogi Park has relatively few cherry trees compared to other parks in Tokyo, it is a beautiful vantage point for the cherry blossom in spring. He is also known for his ginko trees, which turn gold in autumn.

Before the park became a city park in 1967, the area was the site of the Olympic Village for the 1964 Olympic Games. Yoyogi Park is right next to the Meiji Shrine.

The Yoyogi Park Events Square is an open space on the NHK side of Yoyogi Park that is commonly used as a performance space. A large outdoor stage there frequently welcomes musical acts and cultural performances. The square can be accessed via a pedestrian bridge from the main section of Yoyogi Park.

Throughout the year, Tokyo's Yoyogi Park hosts numerous festivals that showcase the culture of different countries and regions..

Throwing a frisbee, flying a kite or playing badminton in the open in the middle of Tokyo? Yes, this sounds like a typical weekend..

Yoyogi Koen is a spacious park for outdoor games and picnics, and picturesque views with trees.

Every Sunday rockabilly dancers gather at Yoyogi Park in Tokyo

Cherry, maple and gingko trees in Yoyogi Park in Tokyo offer a great variety of autumn colours in one place!

A Day at Yoyogi Park

Greenery, tranquility and the occassional superstar popping by to film a show. All in Yoyogi Park.

Just moments from the boutiques of Harajuku and Omotesando, there is a bargain to be found, writes Connie Ng. Once a month, Yoyogi..

The Musicians at Yoyogi Park

Enjoy the charming atmosphere of Yoyogi Park. You can feel the music everywhere, as the park is usually full of musicians: tru..

Come to Yoyogi Park to experience traditional Khmer culture at the Cambodia Festival. With plenty to eat and shop, the highlight..

As an island nation, Japan has a great affinity for seafood, fish in particular. The Sakana and Japan Festival aims to highlight..

The Japan Furusato Food Festival showcases a range of unique hometown foods from across the country. It also places an emphasis..

The Brazil Festival is an annual festival held in Tokyo's Yoyogi Park in mid-July. Its celebratory spirit features lively music,..

Capture the Okinawan beach spirit in the middle of Tokyo's bustling Yoyogi Park at the Okinawa Festival, held every year.

Tokyo's Yoyogi Park holds international festivals nearly every weekend during the summer. Check it out for great food, drinks,..

It's an awesome outdoor festival where you can enjoy eating delicious Latin food, listen and participate in some amazing Latin..

It's hard not to be impressed by the diversity on display at the Namaste India Festival in Yoyogi Park. Food with a local flair..

The Tokyo Food Education Fair is an annual festival held in Yoyogi Park. In addition to programs explaining everything you'd..

EuroFest, a two-day festival held in Tokyo's Yoyogi park, has a wealth of food, drinks, and entertainment from all across Europe,..

Yoyogi Jazz Festival is a free annual event on the spring equinox holiday. It features groups from area schools who really know..

The Laos Festival in Yoyogi Park brings food, drinks, music and culture to Tokyo. Don't forget to try the laap!

The Thai Festival is a massive, exciting annual festival at Tokyo's Yoyogi Park. The enormous number of vendors, performers,..

Cinco De Mayo 2014 is a festival held yearly to commemorate Mexico's monumental victory over France at the Battle of Puebla..

The Vietnam Festival, held annually in Tokyo's Yoyogi Park, is an exciting and delicious slice of Southeast Asian life.  L..

I Love Ireland is an Irish cultural festival held in Tokyo's Yoyogi Park as part of the St. Patrick's Day festivities in..

Pet ownership in Japan is at an all-time high, with lapdogs and smaller canines leading the pack. The Yoyogi Park WanWan Carnival..

Every year, Yoyogi Park transforms for one week into a rainbow of colors as diversified as the people it represents.

Turkey has a rich and diverse culture, and an annual event at Tokyo's Yoyogi Park celebrates this. The two-day Turkey Festival..

The Philippine Festival at Yoyogi Park serves as a celebration of the country's rich culture. Held in conjunction with the Philippine..

Throughout the year, Tokyo's Yoyogi Park hosts numerous festivals that showcase the culture of different countries and regions..

This ramen restaurant was founded in 1985 in Hakata, the birthplace of ramen. Its taste has won a following among foreigners and it has expanded abroad...

Meiji Jingu is located in technologically advanced Tokyo and only a few minutes from the quirky streets of Harajuku. This famous Shinto shrine is hidden..

With easy access from Harajuku Station, ‘With Harajuku’ is the premier shopping and residency space for the glamourous fashion Mecca. At With Harajuku,..

The Tōgō Shrine was established in 1940 and dedicated to Gensui The Marquis Tōgō Heihachirō shortly after his death. This shrine was destroyed by th..