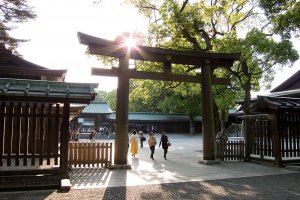 Although it wasn't completed until 1920, the Meiji Jingu Shrine has become one of the most popular places to visit in the Japanese capital. Both the shrine and the adjacent Yoyogi Park are right next to the busy Harajuku Train Station. The approximately 100,000 trees that make up Meiji Jingu Forest were planted during the construction of the shrine and donated from regions across the country.

Meiji Jingu Shrine was destroyed during World War II, but rebuilt shortly afterwards. It is dedicated to the Emperor Meiji and his wife Empress Shoken. During the Meiji period, Japan modernized and westernized.

In the first days of the New Year, the shrine regularly receives more than three million visitors for the first prayers of the year (Hatsumode), more than any other shrine or temple in the country. During the rest of the year, traditional Shinto weddings can often be seen there.

A Shinto shrine located in Shibuya, dedicated to the spirits of Emperor Meiji and Empress Shouken

An Afternoon in Meiji Jingu

The Meiji Shrine is one of the most popular shrines in Tokyo, constructed in 1926 and dedicated to the spirits of emperor Meiji..

They are called ema and they are small wooden tablets used by worshippers to write down their prayers or wishes. The tablets are..

Meiji Jingu is an impressive shrine constructed in honor of Emperor Meiji and Empress Shoken who ruled Japan during the early 20th..

Not that Meiji Shrine in Tokyo itself isn't worth a visit, but combining it with a glimpse of a traditional Japanese Shint..

See ema wooden plaques written not only in Japanese, but also in various foreign languages.

Meiji Jingu is a Shinto Shrine shrine dedicated to the deified spirits of Emperor Meiji and his consort.

A Trip to the Meiji Shrine

A short photo story of the Meji Shrine in Tokyo on a foggy day of June.

A demonstration of the traditional martial art of yabusame mounted-horse archery will be held on 3rd November at Meiji-Jingu Shrine..

Some interesting trivia, as well as a historical narrative of one of Japan's most celebrated shrines - Meiji Jingu, or Meiji..

Meiji Shrine: An oasis of calm in Tokyo

Meiji Jingu is an impressive shrine constructed in honor of Emperor Meiji and Empress Shoken who ruled Japan during the early ..

Meiji Jingu is a beautiful, peaceful Shinto shrine with a lot of history and makes feels like you were away from the hustle an..

Coming of Age Day at Meiji Jingu in Tokyo.

The Inner Gardens of Meiji Jingu are a large, natural area connected to the famous shrine. The gardens include a large pond filled..

Enjoy a stroll through Meiji Shrine and visit the bonsai and suiseki exhibition which happens every year in June. Bonsai is a hobby..

Walk amongst a grove of irises at Meiji Shrine in Tokyo in springtime.

Kiyomasa's Well is located within Meiji Jingu in the Inner Garden. A Tokyo 'power spot', the well is famous for its..

Iris Fields in Meiji Jingu: In June, more than 2000 iris flowers are in bloom at the inner garden of Meiji Jingu (Shrine).

Meiji Jingu: A testament to Japanese history and beliefs

With Koenji being a "creatives town" it's no surprise that BnA Hotel opened there in 2016 and has had, subsequently, an incredible impact on the local..

As one of the largest green spaces in Tokyo, Yoyogi Park is a magnet for Tokyo residents who want to enjoy the sun and nature or who would like to attend..

With easy access from Harajuku Station, ‘With Harajuku’ is the premier shopping and residency space for the glamourous fashion Mecca. At With Harajuku,..

The Tōgō Shrine was established in 1940 and dedicated to Gensui The Marquis Tōgō Heihachirō shortly after his death. This shrine was destroyed by th..