A bastion of historical legacies

Fuchu City is loaded with history and the landmarks to go with it. From traditional homes and secret Word War II hangars to heritage-listed trees and ancient tombs, there is plenty for everyone. Here is a simple introduction to some of the history and landmarks of Fuchu City and how to reach them.

Thought to have originated in the mid-11th century as an offering for military thanks of 1000 zelkova trees, the Babadaimon Zelkova Trees line a 700m-long avenue once used by Tokugawa Ieyasu. Listed as a natural monument, the tree-lined avenue is the only such zelkova-lined area officially recognised in Japan.

A 1-minute walk from Fuchu Station on the Keio Line.

Located on the grounds of the Fuchu City Local Forest Museum, the Former Ochi Family Residence was once part of the rice farming and sericulture in the area. The thatched roof farmhouse was used from the late Edo to early Showa periods and comes complete with traditional design elements including an irori hearth.

A 15-minute walk from Fuchuhommachi Station on the JR Musashino or Nambu lines.

Built in 1944 to protect Japanese fighter planes during the bombing of Tokyo, the Former Shiraitodai Aircraft Hangar sits in the most unlikeliest of places. Surrounded by normal residential houses, the hangar has been preserved thanks to local efforts and was once used by neighbourhood children as a play area.

A 5-minute walk from Shiraitodai Station on the Tamagawa Line.

Designated as an historical site, the Kumano Shrine Tumulus burial mound dates back to the late 7th century. Despite local legends referring to a 'cave' in the area, it was not until the late 20th & early 21st centuries that the tumulus was recognised for what it was. Its layered dome shaped structure sitting a on broad base is a distinctive feature.

An 8-minute walk from Nishifu Station on the JR Nambu Line. 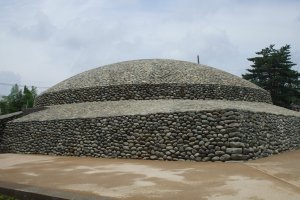 Kim yesterday
That is one seriously unique structure!
Reply Show all 2 replies

Kim 4 hours ago
Can't say I've seen anything like it before! Very cool indeed.
Reply

Elena Lisina yesterday
Stone Kumano Jinja tumulus is very impressive! I'd like to see it.
Reply Show all 2 replies

Sleiman Azizi Author yesterday
Given modern Japan's penchant for the tiny, it's always fascinating to see such over the top large structures in its history.
Reply

Elena Lisina yesterday
It's just amazing how it's built, isn't it?
Reply
6 comments in total
Back to Contents