These are the places to be if you're a gaming fan

To many, Japan is the home of video games. From the vast amount of franchises created by Japanese companies – Super Mario, Sonic, Pokémon, the Legend of Zelda etc. to the influence that Japanese style games have on western culture - think Dragon Ball Z, Street Fighter and Tekken, video games are everywhere.

Japan even paves the way with designing the equipment that the games are played on and revolutionizing current technology ideas to create the gaming revolutions of the future. So, it should be no surprise that Japan itself is a huge destination for video game lovers. But where should video game lovers go in Japan to experience the culture of the country and indulge in their favourite pastime?

There can be no love of video games without some appreciation for the arcade games that spawned the industry. Unlike the western world, where arcade bars are lighter on the ground, Japan is crawling with places to experience the joys of the joystick and the traditional side-scrollers that created the legacy of the game. But Taito Hey Akihabara is the one to visit in Tokyo. The arcade, owned by historic Taito Corporation, creator of the arcade classic Bubble Bobble, is where arcade developers such as Taito, Cave and SNK drop some of their upcoming releases to test out on the eager public.

The team behind Hitman also has another video game string to its bow with this eSports bar. The Square Enix Café allows gamers to come together to socialize, but most importantly to watch one another play titles that encompass old-school high-score arcade battles as well as eSports. eSports have certainly been on the rise across the world, though they likely started in Japan. In the western world, eSports have become so popular with fhe fact that people can bet on the games such as Dota 2 and Fifa changing the way in which the game is played and interacted with. The rise of eSports can also be seen through the rise in eSports tournaments in the UK, such as King of the North and epic23.

To many, Nintendo means different things. Originally, it started as a Japanese card game manufacturer – and indeed still creates playing cards out of respect for its heritage. The headquarters have been home to some of the greatest creations in video game history. However, while the headquarters themselves are impressive, there isn’t actually anything to do inside. Still, many just go to the building as a sort of pilgrimage to the legacy that has been created in the building, including the Super Mario and Legend of Zelda franchises. One thing that strikes many people who see the building is how grey and lifeless it is compared to the output of Nintendo. The juxtaposition makes the games and iconography Nintendo develop seem even more magical, although we have to admit that the characteristic Nintendo logo and color make this modernist block remind us of Tetris on the original Gameboy from 1989.

Stores to purchase video games are a dime a dozen in Japan – especially Tokyo, the technological hub – but Trader Akihabara #4 is dubbed as the best one. The store sells new games, old games, and long-forgotten classics that will help complete any gaming super fan’s collection. The game shops are populated by citizens and visitors alike and are testament to how powerful the gaming culture is in Japan. The Akihabara district itself is known for its dedication to gaming – as much to the newest releases as to keeping the legacy alive.

The Huis Ten Bosch Game Museum is located in the Huis Ten Bosch Theme Park in Nagasaki and is a breathtaking spectacle for all video game fans. Japan’s premier game museum, the exhibits feature everything from the origins of video games – including arcades to play on – to modern-day features and the latest gaming technology. The theme park itself is modelled after a quaint European city, slap bang in the middle of Japan.

Japan is a sprawling country that blends the cutting edge with deeply historic culture and is a sight to behold for visitors. The legacy of video games is one of the biggest calling cards of tourists to Japan, and with such a range of ways in which to pay homage to the history of the video game, gamers and fans alike will not feel like they’ve missed out. 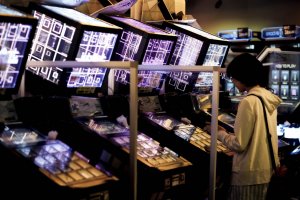 cooper kupsch a year ago
0 love