My Brief, Yet Amazing Japan Sojourn

Why I love Japan even more after my trip

Japan has always been one of the countries that I have dreamed of visiting since I was a kid.

From my reading of battles in the Pacific Theater during World War II I developed a grudging admiration for Japanese military prowess.  One of my hobbies back then was building toy warships, one of which I named “Yamato” in honor of the famed Japanese battleship that was sunk by allied aircraft as she was heading for Okinawa in the waning days of World War II.

There has also been that impression shared by everybody else that Japan is a land of advanced technology. We, in the Philippines, buy, use, and were in awe of  high-quality, reliable Japanese products like Toyota cars, Honda motorcycles, Sharp electronic products, Nikon cameras, to name a few.

But I later learned that there was more to Japan than military power and technology. My stint as a journalist in the Republic of Palau exposed me to more things Japanese.

Working with Japanese up close opened up my eyes to the wonderful traits that astonishingly brought Japan to the pinnacle of economic success in just a short time after suffering massive devastation during the war.

The Japanese have unparalleled work ethic that often make them work past the normal working hours. You can see many of them still working in their offices late at night when everyone else is already in their homes.

The Japanese work ethic has been reinforced by innate honesty and efficiency that have made the Japanese easy and trustworthy to deal with. From the Japanese I also observed unfailing courtesy and respect for everyone.

My friendship with many Japanese in Palau lead to my affinity for sashimi and Japanese cuisine like okonomiyaki, katsudon, teriyaki, yakisoba, to name a few. Eventually, I even learned to cook a few Japanese dishes.

My fascination for Japan and for the Japanese people kept alive my desire to visit Japan. And that opportunity came unexpectedly late in January 2016.

I was fortunate to be chosen as part of the Palau government delegation that was going to the United States (US) to attend the Community Anti-Drug Coalitions of America (CADCA) 26th Annual Leadership Forum.

Our flight to the US involved a long layover in Japan, so I decided to apply and successfully got a Japan Transit Visa (which allows a holder to stay in Japan up to 15 days).

That accomplished, I waited for a few days before boarding a Delta Airlines flight to the Narita International Airport for the first leg of our trip to the US. With me were three other members of the Palau Behavioral Health Advisory Council (PBHAC).

We arrived early morning of January 31, 2016 at Narita. I then waited for Ms. Takenaka, a good friend of mine who previously worked in Palau. While waiting for Ms. Takenaka I met a Romanian professor, who ironically was married to a Japanese national working in Palau. We had a good talk about our chance encounter before Ms. Takenaka arrived to pick me up at the airport.

Before going out of Narita, I got the chance to use the restroom there and I was immensely impressed by the high-technology in those facilities, technology that I did not see even in the US.

I told Ms. Takenaka earlier that I wanted to go to Akihabara District since I wanted to buy a camera that I will bring back to Palau. A colleague who earlier went to Japan told me that I could buy second-hand DSLR cameras for a very cheap price at Akihabara.

I was not familiar with the Japanese train system, so my friend helped me with buying tickets for the train ride to Akihabara.

We boarded the first of two train rides that will bring us to our destination. Along the way we passed fields, houses, buildings and other manifestations of advanced Japanese architecture and technology.

Seeing the fields on my side of the train I remarked to my friend that I thought Tokyo, with its omnipresent tall buildings and city life, is just nearby.

I had this mistaken impression that the airport in Narita is located inside Tokyo, not knowing that actually it is in Chiba Prefecture, some 60 kilometers (37 miles) east of central Tokyo.

After a couple of train rides spanning nearly an hour we arrived at our destination around noon. We proceeded to walk around Akihabara in search of establishments selling cameras and other electronic products.

Since it was late January it was still very cold in most parts of Japan. One layer of jacket was barely able to protect me from the cold winds of Tokyo.

After nearly an hour of searching among the arrays of used cameras on sale I was able to choose two (a Canon and a Nikon camera) and bought them at a very cheap price.

Since lunchtime was approaching we went to a nearby street food stall where we bought chicken and salmon sushi for lunch. The food was great and was not expensive contrary to my expectation and impression that everything in Japan is expensive.

Our flight to the US was scheduled for late afternoon, so my friend and I took the opportunity to stroll around Akihabara. We stopped for a time at a souvenir shop where I bought a bag, a t-shirt, and some souvenir items I planned to bring back to the Philippines for my family.

There were lots of people around, but the streets of Tokyo were remarkably safe and clean, confirming what I have been told by many people who have been to the country before. Save for the policemen in a single police car I saw outside Narita, I did not see any cops around, a marked departure from most cities around the world where police presence is common.

We then waited for the train that will bring us back to the airport. As advertised, the train arrived on time, confirming to me the efficiency and time consciousness of the Japanese people. Such traits, unfortunately, are rarely observed in other countries.

While we were on our way back to the airport, I did not know that my travel companions were already worried that I will be left behind for our flight to Minnesota. But the on-time Japanese train system made sure that I made it to the airport well before our scheduled departure to the relief of my companions.

As our plane lifted off for the US, I told myself that I experienced, in such a short time, more than what I expected. My admiration for Japan and its people was strengthened, leading to a desire for another trip to the Land of the Rising Sun, a trip I hope would be much longer, so I can savor most of the things that the wonderful country and people can offer. 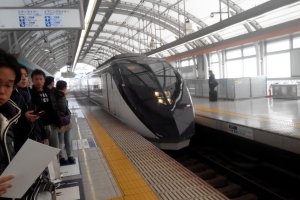 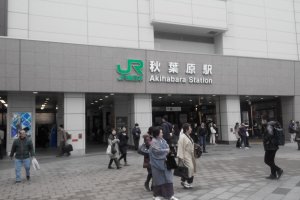 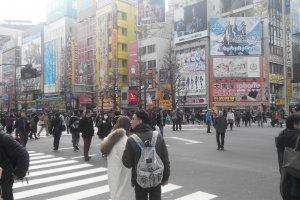 Andrew C 4 years ago
great writing, hope you had a great time!
Reply Show all 0 replies
1 comment in total