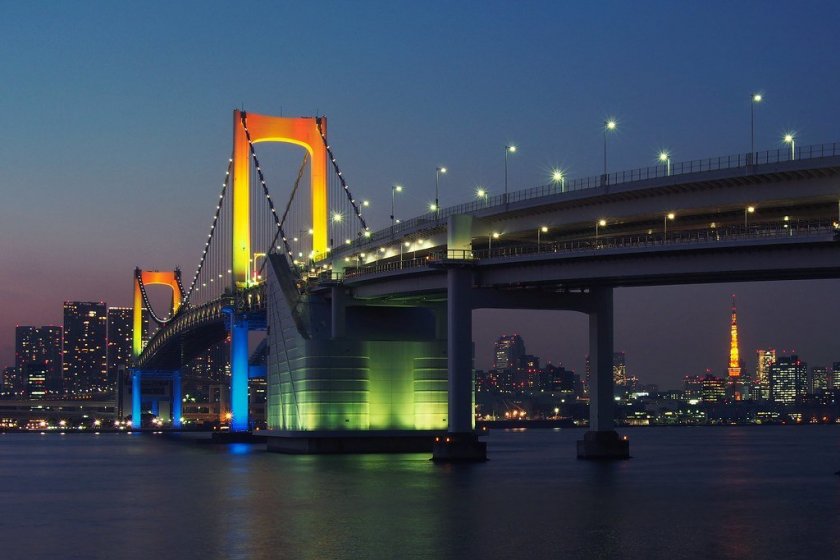 It's only rainbow-coloured sometimes

The Rainbow Bridge is an enormous suspension bridge that connects Tokyo with the man-made island of Odaiba.

When the bridge was built in 1993, it was situated close to Haneda Airport; therefore there were height restrictions closely limiting it - but at the same time, it had to be tall enough for ships to pass safely underneath. Its unique design is immediately recognizable in photos and videos of Tokyo.

The bridge has two decks - one to carry the Shuto Expressway's Daiba Route, and the second hosts Tokyo Prefectural Route 482 and the Yurikamome, the automated transport system running from Shimbashi to the island and around its perimeter. Sidewalks are on either side of the lower deck, with one underpass available for a pedestrian to change from the north to the south walkway. The walkways have opening hours, as well - 9 am to 9 pm in the summer; 10 am to 6 pm in the winter. The gates are closed after that time. Walking the length of the bridge (access it from Shibaura-futo Station on the Tokyo side, Odaiba-kaihinkoen on the Odaiba side) takes approximately 30 minutes. The distance is about 1.7 km from entrance to exit. The north side offers a view of the inner Tokyo harbour and Tokyo Tower, while the south side offers views of Tokyo Bay and occasionally Mount Fuji. Admittedly, many people don't care to walk across the bridge breathing exhaust and hearing the din of passing cars, so I couldn't rate this more than three stars, but the determined - particular walking to Odaiba on the south side - you will be treated to some great views!

Biking across the Rainbow Bridge is forbidden, but you are able to walk your bicycles across. If you do bring a bicycle, a wooden board with small wheels will be attached to each of the bicycle tires that will be taken off at the other side. If you wish to cycle around Odaiba, you can use the bridge to the northeast, from Harumi-dori.

According to the signage on the bridge, the lights change seasonally, for special occasions. The rainbow colours appear during the holiday season and are called "Millennium Illumination." There is also a variation where the lights on the suspended cables are turned pink in support of cancer research, annually in October. The bridge's lights are powered by solar energy gathered during the day.

This is a great spot to go at sunset, and see the lights coming on as the sun goes down! Why not try viewing it from the Decks Tokyo Beach boardwalk?

Find out more about Rainbow Bridge. 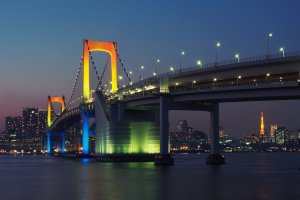 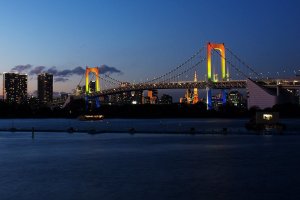 Olga 7 years ago
I like to visit Rainbow bridge fr m time to time. It is great!
Reply Show all 0 replies
1 comment in total