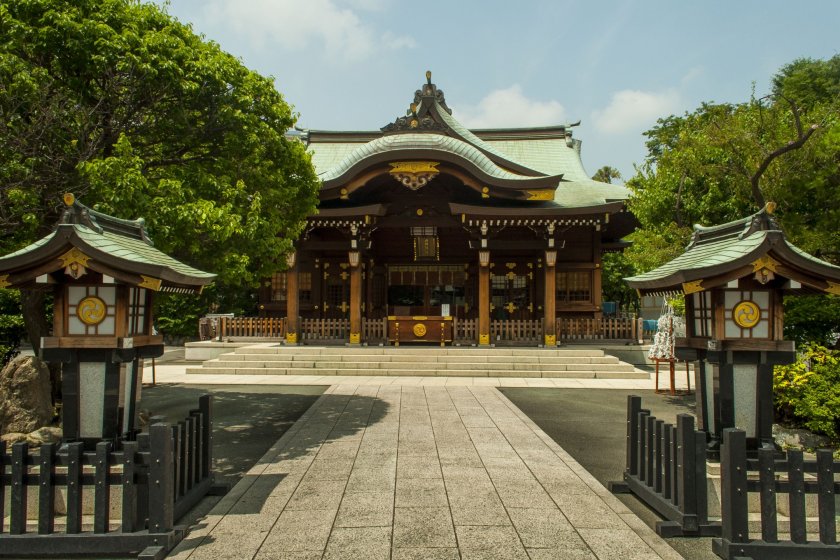 Enjoy the security of the divine protector

The lion-dogs pose with a quiet menace along the street-front entrance. The torii (gate) looms above them, an imposing figure in the midday sun. It's a windy day and the odd tree groans as their leaves rustle. Looking through the gate the walkway leads into a large pebbled courtyard with a smattering of statues, trees and lanterns. With a bit of a rush I step past the dogs and beyond the torii, and something changes. The air stills and trickles of children’s laughter fill the courtyard. The space feels open to the heavens after the cramped streets. The clouds in the sky meander along and the rustle of leaves becomes a whisper in the background.

Exploring the grounds of the shrine yields a few hidden pathways through the trees and a number of auxiliary shrines. There are standing stones with inscriptions, small lion-dog statues hiding in the bushes and more than a few wooden lanterns. There are plenty of spots to stop in contemplation or appreciation, and this is not a place to rush through. If you can find an old stone hand-washing trough it is rumoured that it was a gift from Minamoto no Yoritomo, the founder of the Kamakura Shogunate in 1192.

The shrine is dedicated to Hachiman, the divine protector of Japan and the deity of war and archery. It was very popular with warriors and samurai in the Tokaido region in the early years of the second millennium. It has a bit of history as a neighbour to the old Tama-river ferries, a key point in the old highway that stretched from Tokyo to Kyoto. The suburb now feels a bit forgotten but the shrine itself is well kept and regularly used by the locals. Each year there is a children's horseback archery festival on the 7th of January. The shrine is a short walk from either Zoshiki station or Rokugodote station.

The main building is a large ornate structure made out of beautiful dark wood planks. Decorated with gold and paper lanterns, the shrine is a beautiful example of Heian period architecture with intricately detailed wooden eaves and hints of Buddhist influence. There is, of course, an offering box, so remember to bring a 10 yen piece and give a thought to Hachiman. There are a few smaller flanking buildings that add to the symmetry and depth of the whole complex and to the side there is an information building.

Behind the shrine there is a kindergarten, and the sounds of laughter from small children echoes through the open courtyard. The twitter of birds ring in reply. It's not a quiet shrine, but there's something beautiful about meditating with the chirping sounds of life in the background. With the lion-dogs guarding the entrance and the presence of Hachiman there's a sense of security in this suburban shrine that hides you away from the stress and activity of the world outside. Spend a half-hour here and you will enjoy the peace of mind that Rokugo-jinja holds. 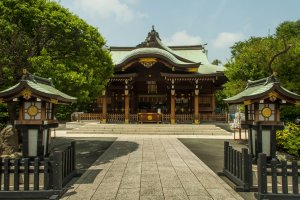 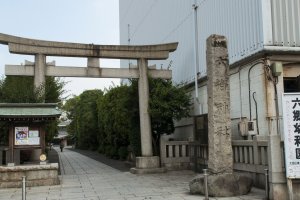 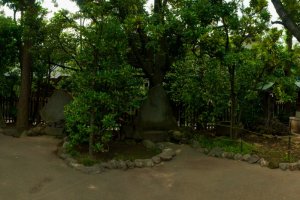