Tokyo—a vibrant city famed for themed cafes: from maids to adorable animals, to unique performance-based shows such as the Robot Restaurant, it might not be an overstatement to say that you can find anything here. But what if I told you there’s a new place in town?

Enter the Samurai Rock Restaurant. With the idea to combine historic Japan with modern, the restaurant aims to entertain guests through a fast-paced, high-energy performance delivered by a talented young cast. But does it succeed?

I had no idea what to expect: samurai and rock aren’t words you often hear in the same sentence . . .

Upon arrival, guests place their food orders and are led to a small performance hall. Seated at a small table in a dimmed room, you will see traditionally dressed Japanese dancers swaying to serene music on stage.

As food is served from the menu (PDF, 1.2 MB), the dancers retreat from stage to leave the guests some time to converse and eat seafood pasta, gyudon (rice topped with beef), unagi (Japanese eel) with cola, ginger ale, beer, or a cocktail. Later, the staff moves the chairs and tables to make space down the middle of the audience, with barriers to stop anyone from crossing. An announcement in Japanese and English states that the show will start in 10 minutes and that guests have until that moment to get drinks or use the restroom. After that, there would be no more moving from one’s seat for the safety of both the performers and the audience.

A single beam of light focuses on a large Japanese drum. Without a sound, a young man steps out from the side of the stage. Standing tall, he turns his back to the audience and faces the large drum before him.

He cracks a drum stick down.

The second hit is as powerful as the first.

The rhythm speeds up and the audience’s heartbeats synchronize as one, following the beat of the drum much like children charmed by the pied piper.

The air crackles with tension as we hold our breaths. Then, samurai are everywhere! They flip through the air, on and off the stage, not staying confined to the stage but running down the middle of the room so close that one can feel the rush of wind as they go by.

How to best describe what follows for the next 50 minutes? It feels like parkour meets gymnastics meets a talent show, and all of this is performed by samurai. In other words, there is a lot going on.

One moment, you are watching samurai spinning through the air, and the next you have a group dancing on stage. With fast-paced music the high-energy performance moves from acrobatics to a yo-yo performance to a show of strength. Balancing acts are followed by the appearance of samurai who look ready to battle it out with a katana fight . . . only, they put away their swords and decide the winner with rock, paper, scissors instead.

When the audience is invited to participate, the atmosphere shifts. We are no longer a second party just watching, we have fully integrated into a part of the show. We cheer, ooh and aah, sitting on the edge of our seats praying that there are no accidents throughout several daring acts.

I feel invested, I am thrilled, and I let out more sighs of relief than I can count.

The entire performance brims with energy from beginning to end. There are no intermissions and so the flow isn’t once broken. The end comes too soon. Then, all energy fizzles away as the performers disappear like a wisp of smoke. With the emptiness, my surroundings become clear once again.

At the Samurai Rock Café, I saw samurai and ninja, I had food, and I was entertained . . . but where was the rock? And where were the famed sword fights of old?

So, does the Samurai Rock Restaurant succeed? Long answer short, yes—if you’re looking to be entertained and are willing to shell out the 5,000 yen for entrance and a drink plus 1,500-3,200 yen for the meal. The costumes are interesting; the performers talented; the atmosphere is both welcoming and immersive; and you’ll be kept on the edge of your seat and entertained for 50 minutes.

The Samurai Rock Restaurant just opened but, with a little tweaking, it should soon join the list of 'must-dos' in Tokyo.

Seating is limited and the show currently only runs once every Wednesday, so if you’re planning to go you need to plan ahead to get a ticket. Doors open at 18:30 giving guests a chance to arrive, settle, and grab a bite before the main show which begins at 20:00 and lasts for 50 minutes.

A short walk from Akihabara JR station, the Samurai Rock Restaurant can be found on the 7th floor of Pasela Resorts Akiba Multi Entertainment. 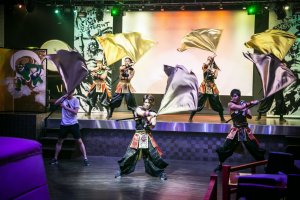 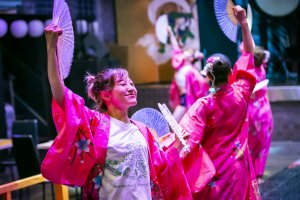 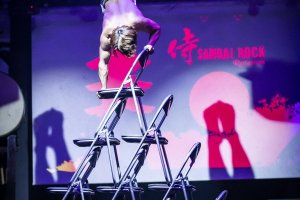 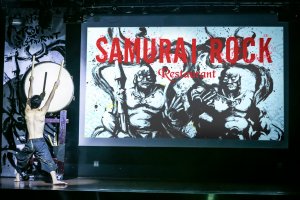 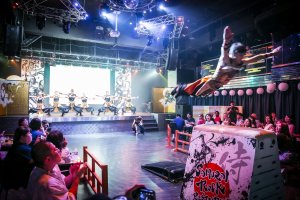 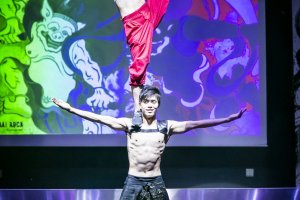