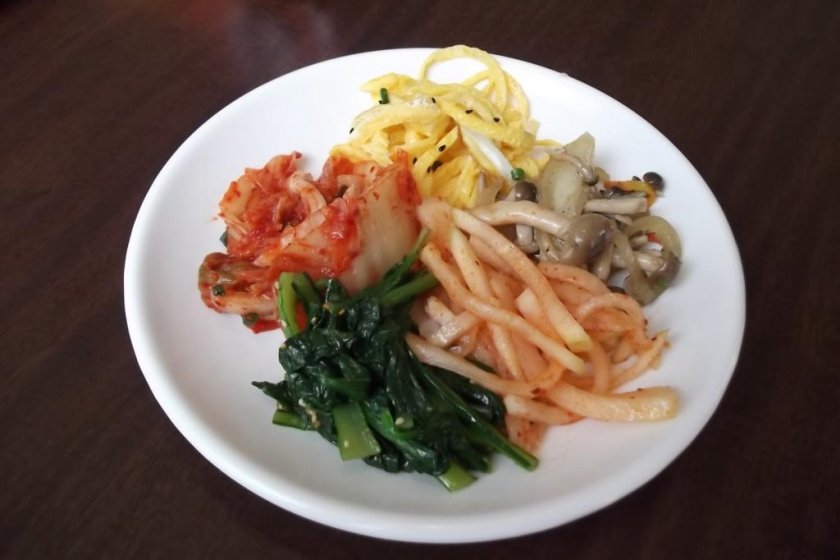 Top value Korean lunch in the centre of Tokyo

My first sortie to the salad bar

There’s a lot of competition for the lunchtime yen in Shibuya, and that can result in some good deals for us customers. One of the best I’ve found is Spicy Spicy, a Korean restaurant in the bustling district around Center-Gai, but up on the eighth floor so insulated somewhat from the hubbub; the lunchtime buffet deal allowed me to fill up on tasty food cheaply, and at a leisurely pace.

On weekdays, ¥980 gets you 70 minutes at the buffet, or if you go at the weekend it’s ¥1200 for 90 minutes; it offers a fair range of dishes, plus a salad counter and drink bar, if that’s not too grand a name for a table with pots of tea and coffee on it. (The sign outside said there were other drinks available and the waitress, who was friendly and spoke a little English, was happy to get me some orange juice when I asked.)

My first port of call was the salad counter where, as well as the usual array of greens, they had two different types of kimchi, one of them quite mild, the other more potent but more tasty too. Further along the counter there were pre-prepared bowls of bibinbap or Korean hot-pot ready for brewing up on the burners on the tables, along with eggs and noodles to add to them.

I could have happily just eaten from that counter, but Korean food also means meat, and the rest of the buffet provided it in abundance. There was fatty pork sizzling on a hotplate, seafood and soft ricecakes in a piquant sauce, tubs of spicy barbecued beef and rice stained red with kimchi, and another of hamburg steak in a smooth, creamy sauce; this last one was very tender and tasty, and balanced nicely with the spiciness of the other dishes.

They also had three different kinds of Korean chijimi pancakes, made with green onion, seafood or kimchi; these were thicker and doughier than I’m used to, but still good and tasty. Over my 70 minutes I tried most of what they had on offer, and even with a couple of pauses I had time to go back for seconds. And thirds.

The interior is authentically unpretentious, with posters on the walls showing Korean pop bands and singers as well as some of the food and alcohol available at dinner time, and a window lined with empty liquor bottles. There was a lively atmosphere created by the perky Korean pop music and the steady coming and going of customers, a mix of office workers, students and shoppers; I reckon it won’t be long before I’m among them again. 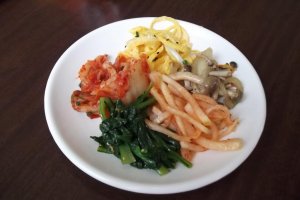 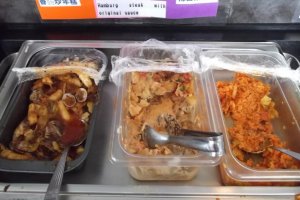 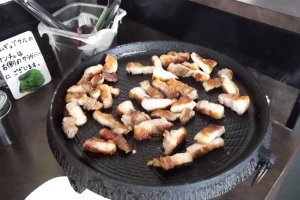 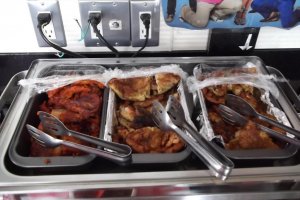 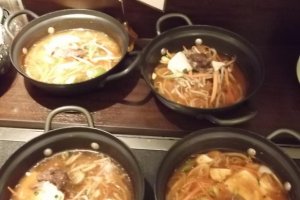 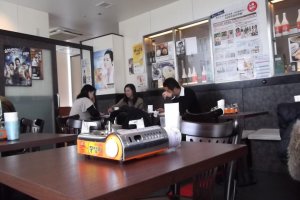