The shrine of Tokyo's most famous samurai head

Japan has no shortage of ghost stories but perhaps the most surreal of them is that of Taira no Masakado and his headless exploits across the nation.

A warrior from Kanto, Masakado led a rebellion in the 10th century against the government in Kyoto. He managed to conquer a few local provinces in the process and flushed with some success, proclaimed himself the new emperor and had his uncle executed. The government in Kyoto responded to this by placing a bounty on Masakado's head that was too good to refuse. And sure enough, it was taken - by his cousin, son of the man whom Masakado had killed... Taira no Masakado's head was now on its way to the capital.

But then a strange thing happened. The now dead Masakado decided that his head ought to stop by a fishing village in what would now be Tokyo. For centuries afterwards, reports grew from concerned villagers and superstitious fisherman of a head that would fly through the streets at night. Masakado may have earned a grudging respect for taking it to a central government but a vengeful spirit was not something that anyone could take lightly. Slowly but surely, the resting place of Masakado's separated dome became a place of nervous supplication and worship.

For generations, the fortunes of Edo and now Tokyo were believed to be intimately connected with Masakado - his agitated spirit coincided with periods of disaster and calamity, a dutifully placated one with prosperity.

With nobody daring to move it, the shrine to Masakado's famous head is now sandwiched between some of the most expensive real estate in Tokyo. The little space dedicated to this aggrieved warrior continues to draw a regular stream of fortune conscious visitors all looking to be safe, rather than sorry.

Take the Chiyoda Subway Line to Otemachi Station. Taira no Masakado's shrine is about 20 or so metres from the C5 Exit. 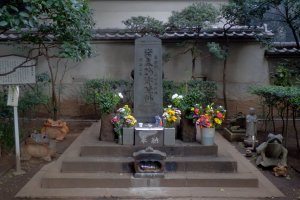 Kim 2 years ago
"a head that would fly through the streets at night. "

Elena Lisina 2 years ago
There are many "strange" legengs in Japan and also spirits. It's very different from my country that has none of that sort.
Reply Show all 1 replies

Sleiman Azizi Author 2 years ago
A by-product is that Japan becomes imbued with so much historical and cultural depth that almost any place becomes interesting in its own right.
Reply
3 comments in total