Heritage on the edge of Tokyo

Tama City, on the far western edge of Tokyo, was actually once part of neighbouring Kanagawa Prefecture. The area became part of Tokyo in 1893 before becoming an official city in 1971. Its location within the foothills of the Okutama Mountains, the city has plenty of nature as well as heritage. Here is an introduction to some of the history and landmarks of Tama City and how to reach them.

A monster of a castanopsis tree, Birikubo no Shii is estimated to almost 600 years old and is actually made up of several trees. The two larger trees have been designated as a Natural Monument and can be found standing within Birikubo Park. The taller tree stands at 25m in height with a 6m trunk circumference.

An 11-minute no.5 or 32 bus ride from Tama Center Station on the Tama Monorail Line.

The Tama New Town No. 57 Iseki Remains are part of an early 4,500-year old Jomon period settlement. Some 10 pit dwellings have been excavated, including several stone-lined homes and prehistoric stone tools. The entire site has been designated as an Historic Site by the government.

A 5-minute walk from Tama Center Station on the either the Keio-Sagamihara, Odakyu Tama or Tama Monorail lines.

Part of the challenging 4.7km-long Yokoyama no Michi hiking course, Miharashi Point is an observation deck located in the south western-most point of the city. Looking back out over the city, the deck is a decent enough spot to take stock and relax before continuing on.

A 5-minute drive or a 20-minute walk from Karakida Station on the Odakyu Tama Line.

The remains of a checkpoint, Kasumi no Seki Minamo Kidosaku Ato is a fence dating back to the early 13th century. Originally a military checkpoint, the fence became a customs office before being destroyed in two hundred years later. The fence remains are now listed as an Historic Site. 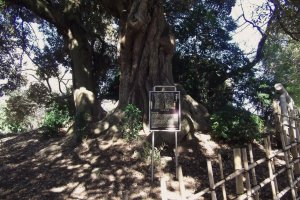 Elizabeth S 3 weeks ago
I stayed with a friend there years ago. In the evening we walked along the river which impressed me with its greenery. Dare I say, it's a little spooky with so much historical heritage and shady tree-lined walks.
Reply Show all 0 replies

Sleiman Azizi Author 3 weeks ago
Yeah, there's a forever feeling about them.
Reply
3 comments in total
Back to Contents