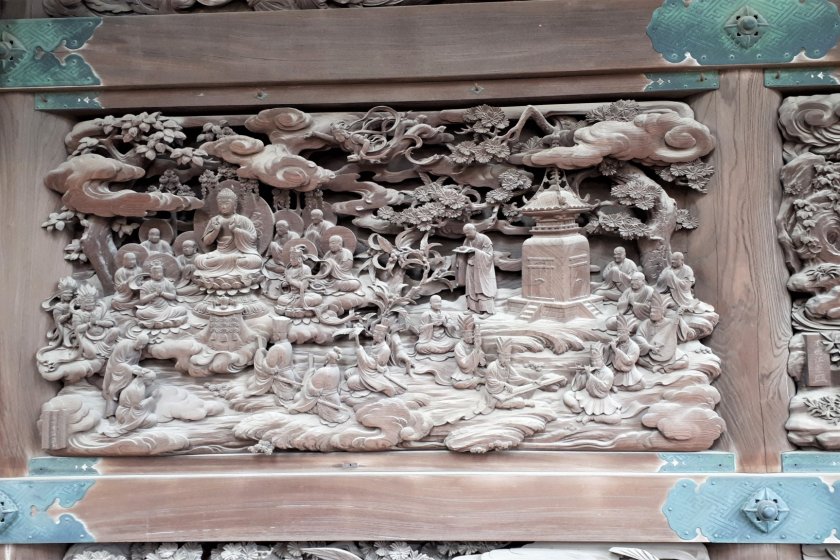 The Wood Carvings of Taishakuten

One of the most incredible sights you will see

Panel titled: "The Offering of a Stupa"

If there was ever a time in my life that I was stunned, today was the day. A simple day out in Shibamata naturally leads to a visit to Shibamata Taishakuten Temple and while I had been in the area before, I admit to not having had the surprise of my life as I did today.

Taishakuten, a Buddhist temple established in the 17th century, is enough of a draw card for visitors that a trip here would seem enough but as you walk around the grounds of the temple, you can't help but notice the glass walls protecting what seems to be a museum of sorts. The wood carvings visible through the glass walls certainly seemed impressive...

The closer I got to the walls, the more I felt the lure of what lay inside. So I entered. While the grounds of Taishakuten are free to enter, this part of the temple complex, known as Taishakudo, requires a JY400 admission fee. I had no idea that in a few moments I would have gladly paid double the price to see what I saw.

Entering, I came across a series of wood carved panels. Exquisitely carved, I was impressed. But as I continued on into the main viewing area, my jaw dropped. I have been to Nikko and visited the magnificence of its mausoleum. I have been awed by the golden pavilion of Kinkakuji in Kyoto. But I never, in my wildest imaginations, expected to see such wood carvings in the backstreets of the retro neighbourhood of Shibamata in downtown Tokyo.

Saying that I was stunned simply doesn't do this creation any justice. Ten panels there were, each one with scores of attendant decorative panelling, and each one a three-dimensional wooden carving of Buddhist lore, wisdom and knowledge from the Lotus Sutra scriptures. Morality lessons, cultural longevity, spiritual dignity and human affectations, the entirety of this work is breathtaking.

At the base of each panel, visitors will find a plaque with detailed information on the themes of each carving, both in Japan and in English. The enormous depth of detail is such, however, that the written word is simply no substitute for seeing it with your own eyes. Each panel is alive and for this reason, any visit to Shibamata is dead without a visit to the wood carvings of Taishakuten.

The temple is a 4-minute walk from Shibamata Station on the Keisei Kanamachi Line. 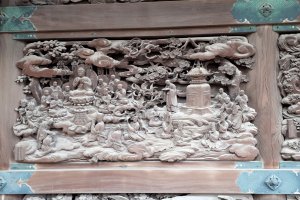 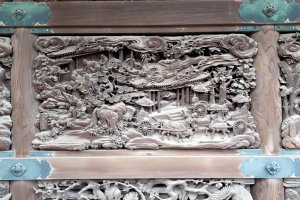 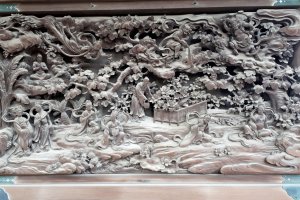 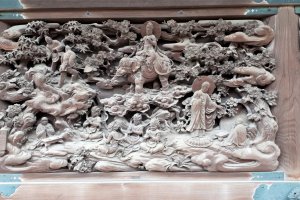 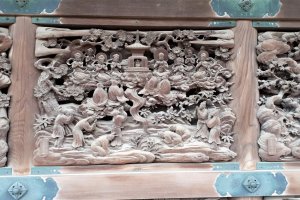 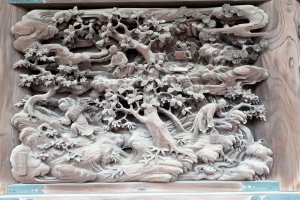 Peter Sidell 9 months ago
Definitely somewhere I want to go... I sometimes see lavishly intricate carvings at other Japanese temples, but these look like something else altogether.
Reply Show all 1 replies

Sleiman Azizi Author 9 months ago
It is something else altogether. The detail leads you on to more detail and so on. Very impressive.
Reply

Elizabeth S 9 months ago
Every time I visit Taishakuten, I find yet another intriguing detail in these intricate wood carvings - the dozen dragons each have unique expressions, and then there are the heavenly beings and wildlife depicted in painstaking detail. The temple is one of Tokyo’s greatest treasures.
Reply Show all 1 replies

Sleiman Azizi Author 9 months ago
I can't impress on the reader just how in awe I was when going over these carvings. A treasure indeed.
Reply

Elena Lisina 9 months ago
It's really amazing carving and it reminds me the carved Chinese vase of my grandmother. The vase was red color with similar fine and detailed carving. What size are these carvings? I bet tis style came from China.
Reply Show all 2 replies

Sleiman Azizi Author 9 months ago
They’re a pretty large size. Basically a wall. They were carved, believe it or not, in the 1920s.
Reply

Elena Lisina 9 months ago
Monks had a lot of patience and time for such a huge work, I bet! :)
Reply

Kim 9 months ago
The level of intricacy is phenomenal!
Reply Show all 1 replies

Sleiman Azizi Author 9 months ago
I was left literally stunned by it all.
Reply
9 comments in total