One of Japan's Top 100 Sakura Spots

Tottori's Utsubuki Park has received a number of accolades for its springtime beauty. It's on the lists for Japan's Top 100 Cherry Blossom viewing spots and the Top 100 Urban Parks, and it's often regarded as the top sakura spot in all of the San'in Region. There are an impressive 4000 cherry trees on the grounds here, along with a range of other beautiful trees and flowers to enjoy - the azaleas that bloom a little later in spring are another highlight.

If you want a quintessentially Japanese photo of your cherry blossom experience here, there is a red bridge over a pond surrounded by sakura on the grounds - it's an incredibly popular spot for snapping a picture (or several!).

Like all flower events, the dates can differ from year-to-year depending on blooming conditions. Plan for around the late-March to early-April timeframe based on previous years.

For those who opt to drive, the park is around 40 minutes from the Yubara IC on the Yonago Expressway. 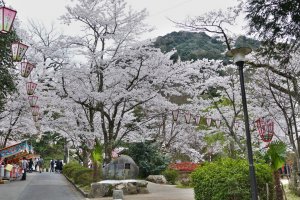