The Five Arches of Kintai-kyo

Bridge of the Samurai

The year was 1600 and the people of Iwakuni had a problem. Namely, the fierce and unpredictable Nishiki River was difficult and dangerous to cross. However, samurai living on the Nishiki side of the river needed a safe means to reach the Yokoyama where they performed duties around the castle and castle town.

Time and time again bridges were built to ford the river, but each time heavy rains washed the bridges away. More specifically, the driftwood piled up on the columns of the bridge and collapsed it. It was 73 years later that a design issued by the third lord of the Iwakuni domain, Hiroyoshi Kikkawa, was finally successful. The result is the beautifully functional Kintai-kyo, or the Kintai Bridge.

While the Iwakuni lord lay sick from a serious illness, he hired a Chinese monk Dokuryu to take care of him. While caring for him, Dokuryu showed him a book called "Seiko-shi". It detailed the history of Dokuryu's town and one page had a picture of an arched bridge. From that inspiration the rest is history.

The original bridge stretched 200 meters in five magnificent arches.The arches are supported by stone supports that are cemented deep into the riverbed. The beauty of design inspired the name “Kintai” which means woven gold sash. It is to the traditional Nishiki style obi worn with kimono.

After 276 years of service, the bridge succumbed to nature once again. Disrepair left the bridge weakened during WWII. The nearby US military base once belonged to the Japanese military, so it is fair to assume their priorities were elsewhere during and immediately after the war. In 1950, the fatal Kijiya Typhoon swept through the area.

The town people petitioned the Iwakuni City Counsel to rebuild the bridge with the original design. The counsel wanted a less expensive and secure concrete bridge. Eventually, however, the citizens prevailed and the bridge was reconstructed three years later and has stood since 1953. The original bridge’s engineering is even impressive by today’s standards, so the original design was kept the same. The bridge is a major tourist attraction and one of the most recognized bridges in all of Japan.

Historically, only samurai were allowed to cross the bridge. Today, anyone willing to pay the small admission price may cross. There is another bridge if you want to cross, but it is a bit of a walk. The Nishiki side of the bridge has hotels and a tourism information center. The Yokoyama side has a park which is great for cherry blossom viewing, several restaurants and ice cream shops, and some gift shops.

Although the river is now just a small stream, it remains historically important. The bridge is near other attractions in town, such Iwakuni Castle, an area to view the sacred white snakes of Iwakuni, and hiking trails. Festivals are held in the area throughout the year, including a samurai march and a fireworks display. One specialty is cormorant fishing demonstrations. This fishing technique involves fishing with cormorant birds. Strings are tied around the neck to allow the birds to eat small fish, but the big ones get stuck and are gathered by the fishermen.

Thanks to the nearby US military base, you’ll find more than your average amount of Japanese people that can speak simple English in town. This makes traveling easier and allows for some fun conversations with locals. 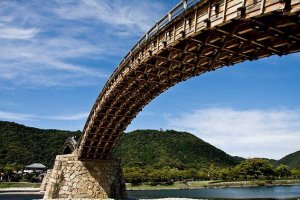 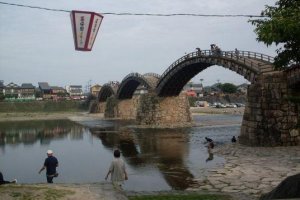 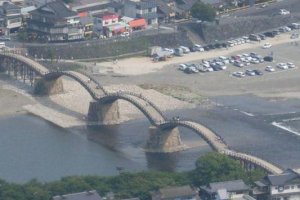 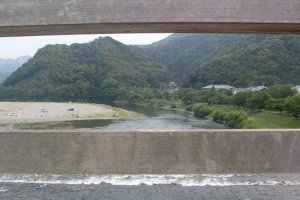 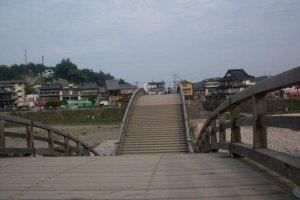 Davide Capretta a year ago
Stunning! Definitely on the bucket list!
Reply Show all 1 replies

Justin Velgus Author 9 months ago
I'll need to revisit! This was one of my first JapanTravel articles!
Reply

Luca De Pasquale 2 years ago
Probably one of the top 3 ICONIC bridges of Japan !

Really like the area around the bridge as well, with the Shiro Hebi (white snake) museum being on top of my list :)
Reply Show all 0 replies

Sleiman Azizi 3 years ago
I enjoyed reading this. That bridge is quite pleasing to the eye, well worth the visit me thinks.
Reply Show all 0 replies

Kim 3 years ago
Such a photogenic spot!
Reply Show all 0 replies
10 comments in total