The 100 Flavors of Iwakuni

Speaking of Iwakuni City in eastern Yamaguchi Prefecture, one would naturally think of Kintai Bridge. The historical wooden arch bridge, was built in 1673, spanning five wooden arches across the Nishiki River. Along the river, there are the usual stalls selling an array of popular Japanese snacks like takoyaki, karaage and yakisoba. (octopus balls, fried chicken and buckwheat noodles)

After crossing Kintai Bridge, in the front of Kikko Park, there are at least three ice cream shops. One had about twenty flavors, another had about fifty. However, there is another one that attracted me to Iwakuni, with 100 flavors of ice cream. Yes, a hundred flavors! There are the usual chocolate, strawberry, vanilla flavors, along with novelty ones like soy sauce, ramen and natto, to name a few.

Most customers spent some time looking at the assortment of ice cream, unable to make a decision. From the top row, there is sakura, five colors summer orange, five colors summer melon, strawberry vanilla mix, matcha Hokkaido vanilla mix, and the list goes on and on. To help make choices easier, there are a few lists, like a list of new flavors, flavors popular among males, females, and children respectively. The various flavors are also categorized neatly, with tea-based, fruit-based, novelty ice creams among the categories. The regular menu is written in Japanese, English, Korean and Chinese. Similar to many shops in Japan, there are the usual limited period editions and seasonal limited editions. There is also a Kintai Bridge special edition costing a whooping ¥3000! Other flavors usually range from ¥200 to ¥400.

It was overwhelming to read all the Katagana next to the ice cream cones display. After spending what felt like more than ten minutes, I finally gave up and reached for the English menu. Looking for some excitement, I decided on the curry ice cream, but it turned out to be vanilla flavoured with some curry powder sprinkled on it. Ramen ice cream was similar, with some dried ramen on vanilla ice cream. The lychee and grape mix had a nice fruity combination.

Definitely a worthwhile trip for ice cream fans. Recommended going in a big group and order all the different flavors to share. 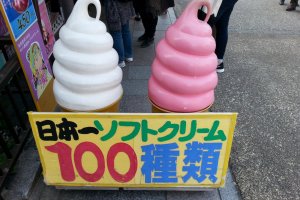 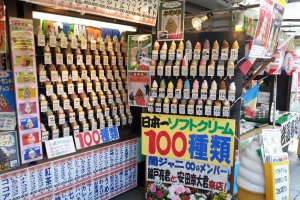 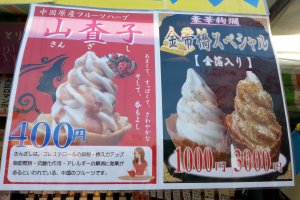 Amanda Ho Author 4 years ago
Yes, I went to Iwakuni just for this!
Reply
2 comments in total