For those who are traveling to Yamaguchi Prefecture, there are several ways to reach the region. There is shinkansen access to the prefecture, but it also conveniently boasts two airports - the Yamaguchi Ube airport on the west side of the prefecture, and the Iwakuni Kintaikyo airport on the east side. Iwakuni Kintaikyo airport offers services to and from Tokyo's Haneda airport and Naha airport in Okinawa, as well as being home to the US Marine Corps Air Station for military operations.

As this is a smaller regional airport, the options for shopping and dining are limited, but you won't go hungry. The one on-site restaurant is Rukka Coffee, which has a variety of dishes on offer - options include several different ramen types, curry rice, katsu, burgers, and more. The menu is written in both Japanese and English, making the ordering process easy. The Sky Shop sells different Yamaguchi-based products if you're looking for a souvenir from your time in the area.

For those who plan to continue exploring the local area by car, there are four car rental company counters on the first floor. One of the benefits of flying into Iwakuni Kintaikyo airport is that it's under an hour's drive from Hiroshima City, for those who may want to explore there as well.

The Iwakuni Kintaikyo Airport is located approximately 7 minutes by car or 12 minutes by bus from Iwakuni Station, which is served by the Sanyo Main Line and the Gantoku Line.

Plentiful parking is available at the airport, and is free for five days (120 hours) for those who are boarding flights. The parking fee discount machine for this is located on the first floor, just outside of the baggage claim area. For those who aren't flying, parking is free for the first hour, and charged hourly thereafter up to a maximum of 470 yen per day. 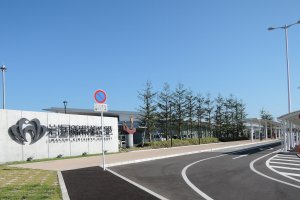 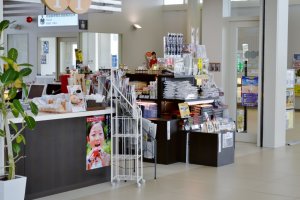 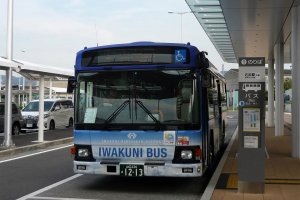