Each year in spring, the Gamagori Classic Hotel in Aichi is home to an azalea festival, owing to the impressive number of azalea bushes planted around the grounds. In total, there are around 3,000 azaleas comprising of five types, in a garden space spanning 3.4 hectares.

The event typically runs from around mid-April through to May 5th (the end of Golden Week), but this can be subject to some fluctuation depending on blooming conditions. Do check the hotel's official Instagram account dedicated to the azalea festival for updates closer to the event's commencement.

The Gamagori Classic Hotel is located approximately 5 minutes by taxi from the south exit of JR Gamagori Station, served by the Tokaido Main Line and the Meitetsu Gamagōri Line.

For those driving to the hotel, it's around 11km from the Tomei Expressway's Otowa-Gamagori IC. The drive from the exit takes around 15 minutes, and parking is available on-site for approximately 200 vehicles. 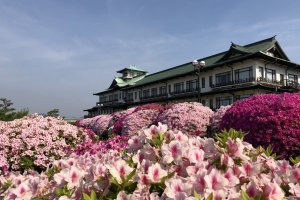