Witnessing a wedding ceremony at a Shinto shrine

When visiting a large Shinto shrine on the weekend be on the lookout for a traditional Japanese wedding. I've seen weddings at Meiji Jingu in Tokyo, at Yasaka shrine in Kyoto and at Sumiyoshi Taisha in Osaka. My friend’s daughter, whose husband is from Hiroshima, recently celebrated her wedding ceremony at the famous Itsukushima shrine on Miyajima Island.

Official marriage in Japan is registered on paper and signed by both bride and groom in a municipal office. It is a formal affair and no special celebration follows. Couples who can’t afford large wedding receptions satisfy themselves with a small party at home or in a restaurant. Traditional wedding ceremonies at Shinto shrines, however, are quite expensive. Furthermore, weddings can only really happen with the agreement of both families involved. I learnt that marriage in Japan is quite a responsible act.

At Yasaka shrine in Kyoto I was fortunate to witness an entire wedding ceremony. The bride and a groom, with parents from both sides, arrived ahead and waited near a ritual Hall. As ritual halls at Shinto shrines have no walls, merely a roof and curtains, it is possible to quietly watch ceremonies from afar even though you are not a relative or guest.

During the ceremony a priest prays and a miko (shrine servant) offers sake to the couple to drink alternately. This is followed by an exchange of rings. I discovered that the rings may be of platinum or silver but not gold. Ceremonies are attended by parents and close relatives while other guests stay outside nearby.

After the ceremony the wedding procession solemnly leaves the shirne in a set order: first the miko, then the newly married couple and a shrine servant behind them with a large red parasol that is held over the couple. Finally, the last to follow are the parents, relatives and guests.

A bride may wear a snow white or bright festive kimono. Traditional headwear may be of round shape or just some beautiful decoration. A groom traditionally wears the wide trouser pants called hakama and a kimono-montsuki. Mothers usually wear a black kimono with festive ornaments while fathers wear formal classic suits. Guests usually wear bright kimono or just modern elegant clothes. After that, follows a photo session on the grounds of the shrine.

Due to their uniqueness and beauty, these ceremonies attract many observers. All of my Japanese friends were married in this fashion though these days, many young people prefer to have 'western' style weddings with the ceremony in a church, modern-styles wedding dresses, a large reception at a restaurant and a western-style wedding cake.

As you can imagine by now, I’d prefer a traditional one! 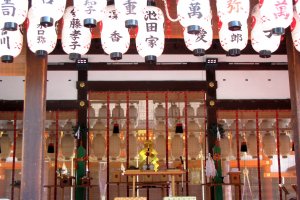 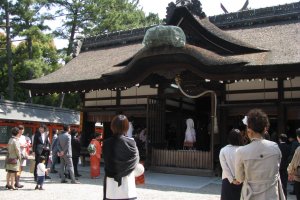 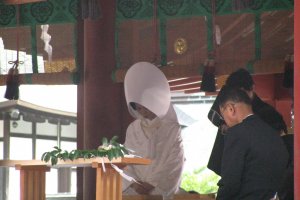 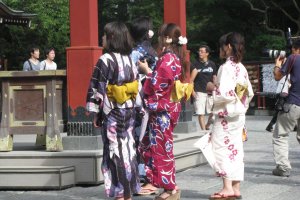 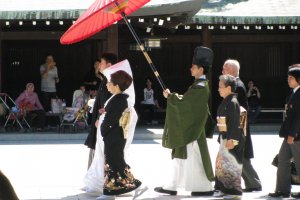 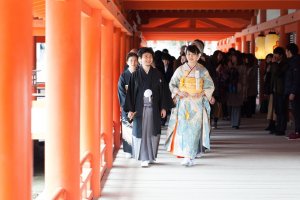 If you do encounter a wedding procession, it’s ok to watch quietly from a distance.
Reply Show all 1 replies

Elena Lisina Author a year ago
Yes, I always watch and take some photos from afar. I don't like when tourists come close and take photos as of some object, even though it's not forbidden, but looks not nice at all.
Reply

Kim a year ago
I love when I've randomly stumbled across weddings like these. So beautiful!
Reply Show all 1 replies

Elena Lisina Author a year ago
Me too! I like old traditions in Japan and I hope they will continue to keep such traditions.
Reply
4 comments in total