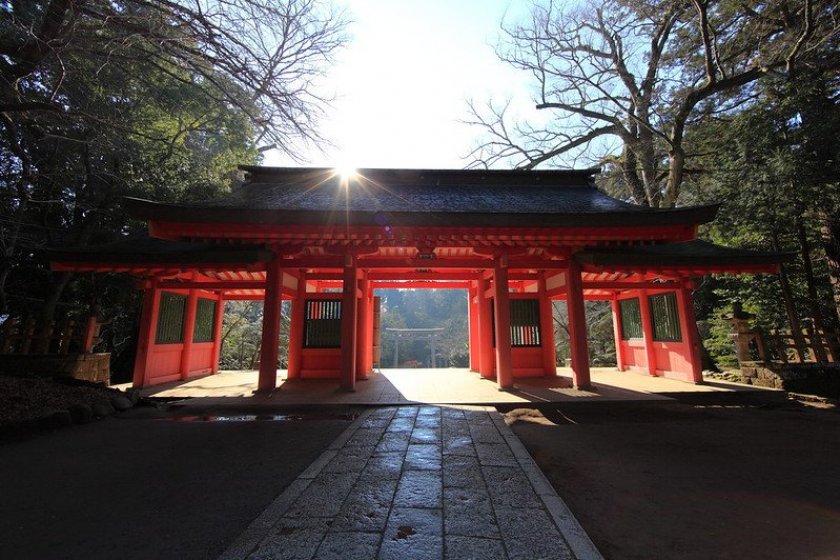 Martial arts students on a pilgrimage to Japan often make their way to the well-preserved townscape of Sawara which is now part of Katori City in Chiba Prefecture. Katori Jingu, their destination, is one of the three original jingu, or grand shrines, located a short distance from the old Edo era town. The town is the birthplace of a martial school that influenced dozens of successor martial schools and masters. At the new year, this shrine is a popular place for the first blessing, but any time of year, it’s a place to connect with the martial spirit.

Before the advent of the Meiji era ushered in by the restoration of the emperor in 1868, only three of Japan’s shrines bore the title of jingu, a designation reserved for shrines of national and historical significance. These were Ise Jingu, Kashima Jingu, and Katori Jingu. Later, other shrines were granted the title, but these three are the models of jingu to come.

The name Katori may be familiar to visitors and residents as there are about 400 shrines bearing the name all over Japan. This head shrine was founded over 2000 years ago to show respect to Futsunushi no Mikoto, a warrior deity mentioned in Nihon Shoki, one of Japan’s classical age chronicles.

At this sacred space in Chiba, a swordmaster, Iizasa Choisai, came to meditate and claimed to receive a transmission of martial secrets from the deity. He originated Tenshin Shōden Katori Shintō-ryū, one of the oldest martial traditions in Japan, and progenitor of many other schools.

The grounds today are tranquil with a flurry of cherry blossoms in spring and dazzling autumn foliage. The shrine precinct extends over a rolling landscape with many minor shrines. Near Gokoku Shrine surrounded by woods, visitors can spot the kanameishi, a talisman against earthquakes with its roots deep in the earth.

The highlights of the shrine precinct are the 18th-century vermilion gate, bearing a plaque with the calligraphy of Fleet Admiral Togo, and the main shrine building with its cypress bark thatched roof. These are precious relics, as Katori Jingu, like Ise Jingu, was deconstructed and rebuilt periodically until political turmoil interrupted the tradition.

Besides the main shrine and the gate are other cultural properties of national significance. In the treasure house, visitors can see the beautifully decorated Kaiju Budo Kyo that is numbered among the three preserved mirrors of Japan. Also in the collection are ceramic koma inu, guardian dogs that appear on Japan’s postage stamps.

Find out more about Katori Shrine. 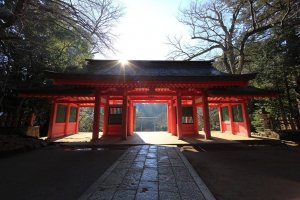 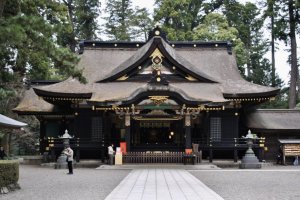 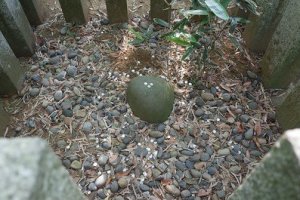 Lynda Hogan a month ago
Great information, thanks for sharing.
Reply Show all 0 replies

Bonson Lam a month ago
Oh to be a fly on the wall and hear the stories that were told here in the thousand years since its founding.
Reply Show all 1 replies

Elizabeth S Author a month ago
There must be so many stories here.

By the way, Katori Shinto Ryu, the martial school rooted in the shrine and city, requires a blood oath and a promise not to reveal the art to outsiders.
Reply

Sherilyn Siy a month ago
That red gate is so grand... befitting the birthplace of a martial school.
Reply Show all 0 replies

Sleiman Azizi a month ago
That talisman against earthquakes might need to work a bit of overtime...
Reply Show all 1 replies

Elizabeth S Author a month ago
Yeah, we might need a few more of those.

Kashima Jingu has another.
Reply

Elena Lisina a month ago
Interesting! Thanks!
Reply Show all 0 replies
7 comments in total