A festival of mud and photography in Shirokawa

The Doronko Matsuri (Mud Festival) and Photo Concourse is held early in July in Shirokawa, Seiyo, in the rainy season when rice is planted. It’s held around a little oval rice paddy that has yet to be planted with rice. Hordes of photographers gather on the stone terraces that overlook the paddy, as well as spectators from all over Ehime and as far afield as Hiroshima. The weather at this time of year is very hot and muggy with overcast skies, and everybody sweats a good deal.

The festival starts with blessings in the adjacent shrine where beautiful black bulls wait for their turn in the paddy. In the shrine grounds, there’s a strong aroma of excrement. Nobody seems to mind much.

The bulls are got into the paddy and simple wooden plows are attached. This is the “Ushi no shirokaki” - plowing by bulls. The photographers are warned not use the flashes on their cameras lest the bulls go berserk, but there are still plenty of flashes. The bulls stir up a good deal of lighter-colored mud, and drop plenty of fertilizer into the water for the humans to frolic in later. After much shouting and thwacking with bamboo switches and a good deal of mutinous behavior including kicking water repeatedly with the back legs, the bulls are got in line. They plow, beautifully, round and round. Sometimes they go off on their own and are brought back into line with much trouble. Gradually the bulls and plowmen become plastered with mud.

While these bulls do a very good impression of working animals, all the working bulls that everybody used to keep for this plowing are now gone. The commentary over the loudspeakers informs us that these are ‘meat cows’ that are trained up at great pains and cost for this performance. Some of the plowmen are also novices. As one elderly gentleman who took my photo observed, “There used to be more bulls than photographers. Now there are more photographers than bulls.” That much was undeniable.

After the bulls come the bean planters, “Aze mame ue”. The man in front drives off the insects with smoke, the second man tills the soil, the third plants beans, and the forth casts rice husks to cover the beans. Unfortunately, the fly scarer accidentally whacks the tiller with his censer a couple of times and an epic fight breaks out, with flying kicks and sumo-esque upturnings.

This is followed by a ceremony of offerings from the fields, woods and seas, the “Sanbai oroshi”. Three gentlemen with painted-on mustaches and very fancy miter hats perform a dignified ceremony with drums. Unfortunately, a demon insists on taking part, and the staid percussionists are interfered with persistently. The droll commentary from the loudspeaker informs us that the demon just wants to take part in the ceremony. The serious men in hats are in fact not all that serious either – they seem to make a mockery of regular Shinto rituals, which don’t typically involve leaning backwards over pools of mud.

Soon the Shinto celebrants and demon are thrusting each other and pratfalling into the mud. It’s all good fun. Apparently those who actually carouse in the mud have it streaming out of various orifices for a couple of weeks afterwards, and their wives find traces of it in the bed sheets. Nice.

Once the devil gets out of the muck, it’s time for the “Saotome odori”, the dance of the rice planting girls. These are the only participants who aren’t expected to get muddy. They dance to two tunes relayed by the loudspeaker. Before their dance began, they were the object of frenzied attention from the photographers, and some of the ‘saotome’ were clearly lapping it up.

Finally, after the mud has been thoroughly ploughed, kicked up, prayed and danced over, some little boys in straw hats with their faces wrapped with towels plant some rice, “O ta ue”.

The last event is “Mochi maki”, the throwing of rice cakes from a raised platform in the shrine grounds. Some of these little projectiles contain chits for good things like electric fans, cassette recorders and pressure cookers, and so those with an interest in these goods scramble about in the hail of rice to get hold of them.

And that concludes the Doronko Matsuri. The moment the last piece of mochi falls out of the sky, everybody is gone – off home to Shirokawa on foot, or by car to Matsuyama and cities nearby. A car is really the only practical way to get to this festival, but it’s a very good day out. 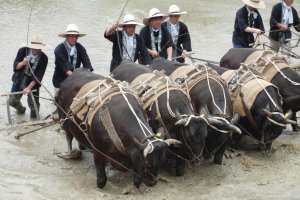 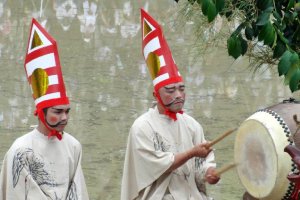 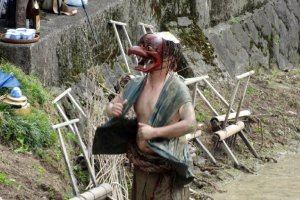 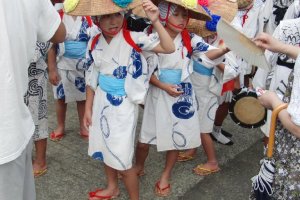 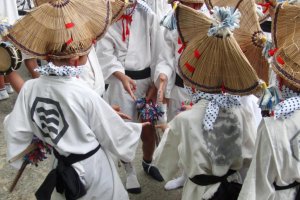 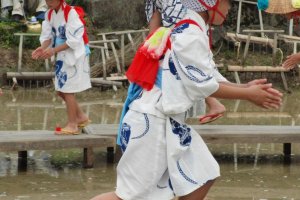 Held on the first Sunday every July.

Sleiman Azizi 3 years ago
Geez, that would be an interesting sight to see...
Reply Show all 0 replies

Kim 3 years ago
There are definitely some unique and interesting festivals held in Japan!
Reply Show all 0 replies

Elena Lisina 3 years ago
Interesting! And I'd like to watch that!
Reply Show all 0 replies

Mackenzie Scott 11 years ago
Love the report, but not sure I'll put this at the top of my must-see list: "Hot and muggy," "everybody sweats a good deal," "there’s a strong aroma of excrement" and the people "frolic" in fertilizer.
Reply Show all 0 replies
5 comments in total