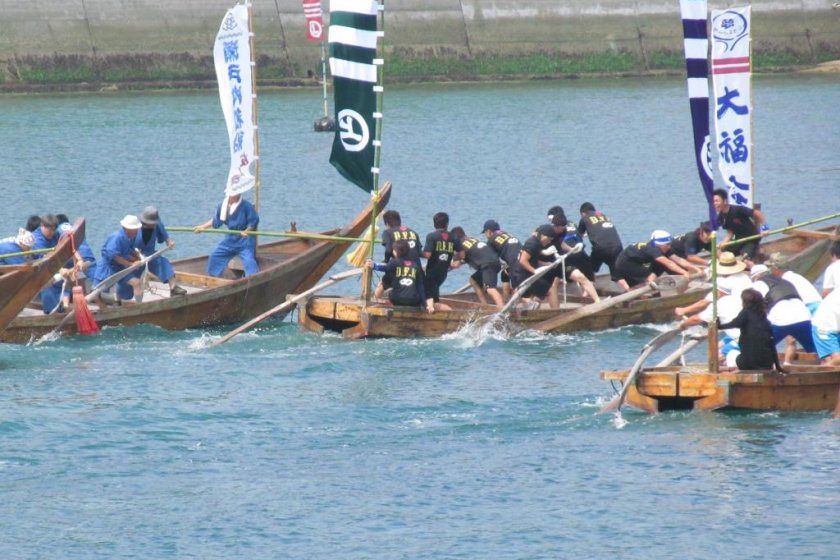 Avast me hearties! These pirates can row!

The Seto Inland Sea is a rugged environment of islands separated by channels that are roiled by strong currents when the tide changes. From the 13th to 16th centuries various suigun—feudal navies—arose and developed their unique livelihoods and culture around the Inland Sea. With their intimate familiarity with the swirling currents and their prowess at fighting from boats, these sea dogs were pirates, coast guards, and local governments as time went on.

The culture of the suigun is still celebrated in Ehime. At Miyakubo on Oshima Island, a lively festival is held every year in July called the Suigun Race. The race is held in front of the Murakami Suigun Museum. Many teams from around the prefecture compete in a race between four of the peculiar rowing boats used to such good effect by the suigun of old.

These boats have a crew of ten. There are four oars, each driven by two crew each, and a further oar at the back driven by single crew member. This also serves as a rudder. A cox with a loud voice stands in the bow of the boat. The crew rows standing up. Since the oars are arranged asymmetrically, it’s pretty hard to make the boat go in a straight line from the start to the goal. Everybody rows like crazy and the cox has to maintain control of all their efforts. The course itself doesn’t seem very long to a landlubber unused to hand powered navigation, but I’m sure it must be long enough for the rowers.

Competition in the boat races is fierce. The teams are divided into several classes based on their performance, and the races of the advanced teams are impressively fast. The strong teams pull away from the start line quickly and maintain the sort of speed you might expect from a small outboard. To get the full flavour of the rowers’ efforts, I recommend using binoculars so that you can follow the teams to the goal.

There are other attractions besides the boat race. In the opening ceremony, local children play taiko drums. The pounding of Japanese drums is very stirring. The festival is an opportunity to try some of Imabari’s popular foods such as yakitori pan-fried chicken, and different seafood. This year, luckily, I saw a tuna filleting performance. The cook showed complete mastery of his knife, and the freshly prepared tuna was on sale afterwards.

After the boat races, there’s a fireworks display with 3,000 fireworks. If you have time to wait for the fireworks, I recommend that you stay to see the display. 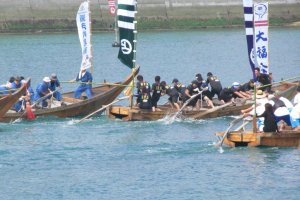 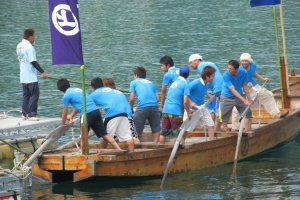 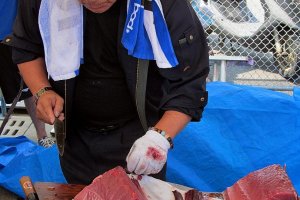 Kim a year ago
This looks like it'd be fun to watch!
Reply Show all 0 replies
1 comment in total