It's when I do things like try to reach the Bandai Plateau by public transportation that I realise how spoilt I am where I live. Deep in the countryside of Fukushima, it's reached by a bus that runs every hour or so, from a station where trains stop every hour or two. Faced with this, I decided to leave an hour's gap when I switched from train to bus, and trust that there'd be somewhere I could have lunch. And there was.

The interior is cheerily rustic, with lots of wood used for the furniture and fittings; there are three of four tables opposite the counter, then a raised cooking hearth by the window, which also serves as a counter for diners. It's decorated in a style I'd call 'strategic clutter'; plastered around the walls are prints, exhibition posters, menu lists and photographs, while hanging over the hearth there are dried plants, a shell necklace, and a Vietnamese conical hat. By the counter, there are variously a case of aged manga, a fish tank, and a vinyl turntable, on which was playing the soothing but incongruous jazz of Miles Davis. To complete the vibe, there's an equally cluttered shop immediately attached, selling a mix of gift items and ceramics.

I actually changed at Inawashiro station twice: both times I came to Manpei, and both times I had the same thing, the curry rice. It was tasty and satisfying, with a little more of a spicy kick than other curry rices I've had. The first time it was complemented by a small dish of very fresh tomatoes, which the proprietress gave me for free.

It's more or less immediately in front of Inawashiro station, on the JR Ban'etsu west line, between Koriyama and Aizu Wakamatsu. As you leave the station, it's to the right, on the other side of the parking area. 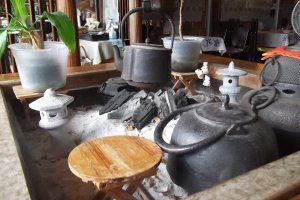 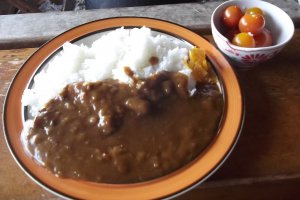 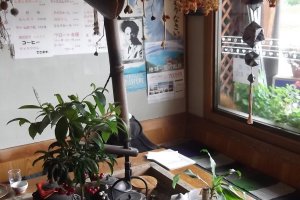 Kim 3 months ago
There's something so inviting about places with a hearth like the one in your first photo!
Reply Show all 0 replies