10 Things to Do in Japan in February

There are dozens of things to do in Japan in February. It is a cold month, but if you wrap up well, you can enjoy activities and witness celebrations limited to February or the winter months only. There are also two public holidays during the month of February. National Foundation Day is on February 11th and the Emperor's birthday is February 23rd. You will be able to enjoy events to mark both occasions. Here are 10 more ideas for a memorable February visit to Japan.

This is something that can be done in every city, town and village around Japan. Setsubun is celebrated on February 3rd annually. People celebrate at home but also at shrines and temples that have a 'mamemaki' bean throwing ceremony. Although, some shrines and temples celebrate it on a different date, the vast majority celebrate it on the 3rd. However, apart from beans they also throw such things as amulets, candy and even money. Anybody can participate and generally, these events are free of charge. Update January 2021: as Setsubun falls during the State of Emergency this year, the vast majority of bean throwing events have been cancelled.

Ice skating can be enjoyed in Japan all-year-round in indoor skating rinks. However, during the winter months you will also find several outdoor ice rinks. Many of these are at outdoor summer pools that convert the pools into ice. Others are specifically erected at shopping centers. You can also find a few natural ice rinks in the rural areas of Japan. If you are on the mainland of Japan in February, you are bound to be within commutable distance of an outdoor seasonal ice-rink.

There are dozens of prefectures that have snow resorts. Even prefectures where snow doesn't fall often have an indoor ski resort. You don't have to stay overnight as most places offer day skiing. There are even some really convenient ski slopes that are close to either a train station or a highway interchange. You don't have to have any experience and the vast majority have classes for beginners.

Take in the illumination

A lot of winter illumination finishes in December. However, the larger night illumination displays generally run until mid-March. Illumination at malls and leisure complexes usually run until Valentine's day. Moreover, there are some places with natural winter scenery such as icicles that are lit up in January and February only.

Only in winter can you see ice walls, icicles, snow statues and other snow or ice created scenery. It is also the only time you can enjoy snow festivals. There is still plenty of snow in February in the regions that enjoy snow fall annually. Furthermore, prefectures that don't have snow offer some innovative ways to enjoy scenery in the winter months. For example, the kotatsu boat rides are typically only available in January and February.

The Dolls Festival 'Hina Matsuri' is on March 3rd annually. However, the dolls get displayed from February. Some places put up their dolls earlier than others, but by the second half of February, it is easy to find Hina Dolls on display in almost every town and city in Japan. In Saitama Prefecture, just North of Tokyo, you can see Japan's largest pyramid doll display.

Indulge in a hot spring

Of course, this can be done all year round, but what better time to take a hot bath than in the cold months of winter! There are hot springs all around Japan. You may even be lucky enough to have one in your hotel or ryokan. If you are in snow country, I highly recommend you brave a 'rotemburo' outdoor bath. There is nothing quite like viewing snow from an outdoor hot steaming bath.

One of the highlights of the seasonal foods available in February is the "dessert buffet". Combining Valentine's day celebrations and the abundance of ripe strawberries, restaurants and hotels around the country put on a dessert buffet in February. You can also pick up seasonal treats for setsubun and the dolls festival at any supermarket. 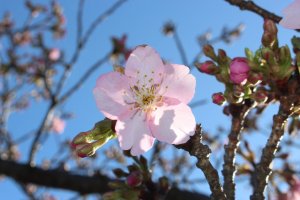 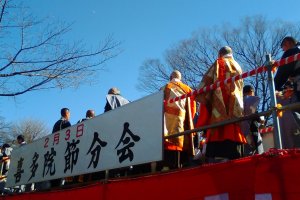 Sebastian Schuster a year ago
When I moved to Japan from Germany and I purchased the beans for Setsubun in our nearby Conbini, the woman was asking me if Im planning to throw them. I said no, i want to eat them by myself :D
Great list of activities. Spring is not my favorite Season is Japan, but there a lot to experience :)
Reply Show all 0 replies

You can pre-order the sushi rolls from supermarkets and convenience stores in time for Setsubun.

I’ve got time on my hands, so I’m thinking of making my own.
Reply Show all 0 replies

Bonson Lam 2 years ago
Great idea for Hanami in February. There are flowers in Japan nearly every month in the first six months of the year
Reply Show all 2 replies

Lynda Hogan Author 2 years ago
With the cherry blossoms very few other trees get a look in! But its as nice to hanami under the plum blossoms as the cherry blossoms. My favorite of the three "blossom" range is the peach blossom! But will have to wait until March / April for them!
Reply

Bonson Lam 2 years ago
Peach Blossum! Definitely overlooked. Would be good to see some articles featuring that in the future.

Sherilyn Siy 2 years ago
Good list. I often discourage friends from visiting in the winter but you gave great reasons to come.
Reply Show all 1 replies

Lynda Hogan Author 2 years ago
January is actually my favorite month in Japan. With all the unique traditional events throughout the month, plus the wintersweet and a lot of the things on this February list available too, there is never a dull moment! Plus its dry. February unfortunately is that bit colder, and not as dry as January, but there is almost as much to do. :-) Plus the plum blossoms and early blooming sakura grace us with their presence.
Reply

Lynda Hogan Author 2 years ago
They are so delicious aren't they :-)
Reply

Kim 2 years ago
Yes! Often expensive but well worth the cost!
Reply
15 comments in total
Back to Contents