Guide to Accessible Travel in Japan

With an aging population and the upcoming Olympic and Paralympic Games 2020, Japan has increasingly taken steps to ensure that residents and travelers with disabilities enjoy greater accessibility in the nation’s cities and tourist destinations.

In major cities such as Tokyo and Kyoto, all city buses have been converted into non-step buses, which provide easier access from curb to bus with the aid of ramps provided by the bus drivers. The buses themselves also have a space where wheelchairs can be easily parked, and buttons low enough for wheelchair uses to reach when needing to signal a desired stop.

Buses in rural areas and long-distance buses (often referred to as highway buses) may provide more of a challenge, as they are often equipped with steps and lack places for wheelchair parking. Airport limousine buses also provide the same challenges, and it’s best to alert staff when making advance reservations about any mobility issues or limitations.

In Tokyo and several other large cities, subway trains provide a large space at the end of certain cars to accommodate riders in wheelchairs. Metro staff also provide ramps for wheelchair users to assist in getting from platform to car; if you tell them your destination, they will call ahead to be sure a staff member is ready at the opposite end to assist with disembarking as well.

On trains themselves, those using canes walking aids (canes, crutches, walkers, etc) may want to make use of the priority seats, a specially reserved section of seats designed to accommodate those in need of greater assistance. The seats, usually located at the ends of the cars, are set aside for travelers with physical impairments, as well as those who are pregnant or are traveling with small children.

In most stations, at least one ticket gate can accommodate wheelchair users. It is usually located closest to the station attendant's booth so that any issues can be resolved efficiently.

Elevators are available at nearly all metro stations in Tokyo to carry riders from the platform to the ticket gate and again from the ticket gate to street level. However, metro stations with numerous exits (such as those in Ginza or Shibuya) may only have one or two elevators in total, which may not bring passengers up close to their desired location. If an elevator is out of service, an announcement is often made on the train prior to arrival at the station in question. While those announcements were traditionally in Japanese only, in recent years they have also been made in English.

Travelers in wheelchairs will find the shinkansen to be a comfortable experience with a bit of preparation. Reservations can (and should) be made in advance for a wheelchair-friendly seat. Staff will assist with boarding and disembarking and ramps are provided, if needed. On board, most shinkansen now boast a large accessible toilet, with low buttons, interior handrails and ample space.

The hotel industry has stepped up its game in recent years to better accommodate visitors with disabilities. New hotels must comply with barrier-free regulations and offer at least a handful of accessible rooms. Some older accommodations have also been making upgrades and including more accessible facilities in the process. An excellent site for determining the suitability of hotels in Tokyo is Accessible Tokyo.

Recent tourist sites are designed to be universally accessible, so expect ramps, elevators, and other accommodations at newer museums and related sites. Older locations have been working to install certain facilities, such as ramps, but some naturally struggle to reconcile historic and structural integrity with modern accessibility demands. Some shrines and temples are more accessible than others, but that may involve a hidden elevator or off-limits path, and it’s often up to the visitor to ask.

Many sidewalks in Japan are marked with yellow “guide lines”, or tactile surface indicators. These consist of yellow blocks marked with either raised lines or raised dots. The raised lines indicate the continuation of a route, while the dots signal a stop or, in some cases, a change of direction. They are ubiquitous in cities like Tokyo and Kyoto, though only on sidewalks. Some smaller neighborhoods don’t have sidewalks, and pedestrian traffic has to share the road with vehicular and bike traffic. These guide lines are also found in all train stations, terminating at staircases and elevators.

Did you know? These are actually called Tenji blocks and originally invented by Seiichi Miyake in 1965, before being launched in Okayama city on March 18th 1967, next to a school for the blind. // Source: Google

While Japan still has many ways in which it could work to improve accessibility for all visitors, there is hope that the next few years leading up to the Olympic and Paralympic Games will see even more progress in the installation of services that will greatly enhance the experience of visitors with disabilities. 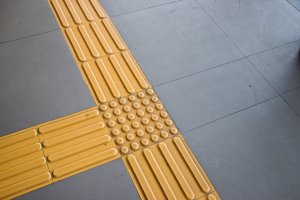 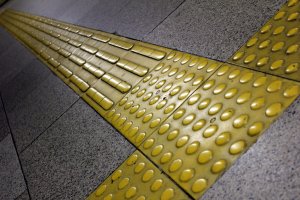 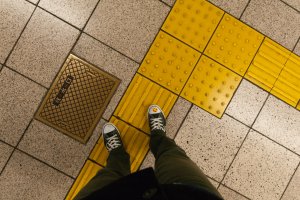 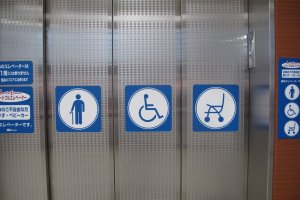 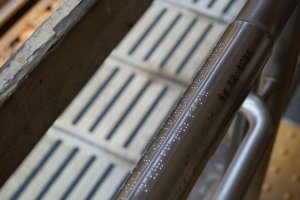 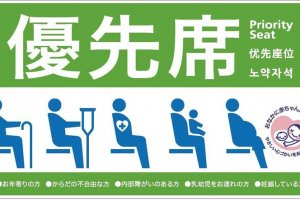 At many train stations, you’ll hear chirping of birds. The sounds indicate where elevators and ticket gates are located.

Kim 3 years ago
Great post! I feel like I'm seeing a greater number of locations that are becoming accessible, which is certainly a move in the right direction.
Reply Show all 0 replies
4 comments in total
Back to Contents