What to do when the coin exchange machine doesn't work

Along with trains, riding the bus is one of most common forms of transportation in Japan, carrying thousands of people every day. With so many people using them, various problems are bound to occur.

In this article, I would like to share one of the problems that you might face on a bus in Beppu City and how to deal with it: the coin exchange machine.

If you don’t own a bus card or haven't purchased a day pass, you'll need to have your coins available to pay the fares before getting off the bus. Sometimes, though, you don’t always carry enough coins to pay and so have to convert your notes at the coin exchange box.

But after inserting your ¥1000 bill into the box by the driver's seat (the machines won't accept any other notes), you note that it doesn't convert the entire amount, giving you less than you put in. In this case, you might expect the bus driver to give you the deficit. However, they do not.

Instead, Japanese bus drivers will offer you an exchange voucher like the one pictured below:

These vouchers are known as a 'tsurisen hikikae sho' and are divided into basically two parts, how much you are owed and where you can go to collect your money.

1. The amount which you are supposed to get back.

2. The places where you can go to exchange the voucher for your money in Beppu.

Where to go to collect your money

The four places listed on the above exchange voucher are:

It might seem annoying to have to travel to these places to claim your money but that is the system. Remember to take care of your voucher. If you lose it, the office will not reimburse you. 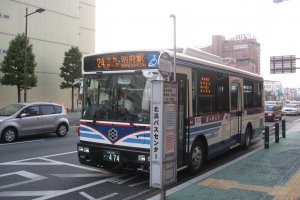 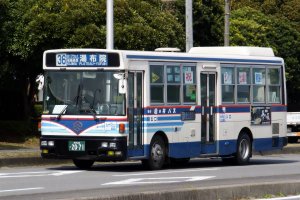 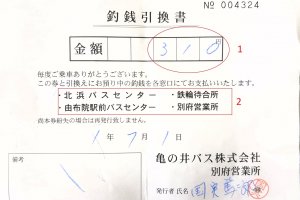 Sleiman Azizi 7 months ago
A bit of help can go a long way.
Reply Show all 0 replies

Scott Brause 7 months ago
This is good info. I bet the voucher system is the same practically anywhere in Japan. Thanks!
Reply Show all 0 replies
2 comments in total
Back to Contents