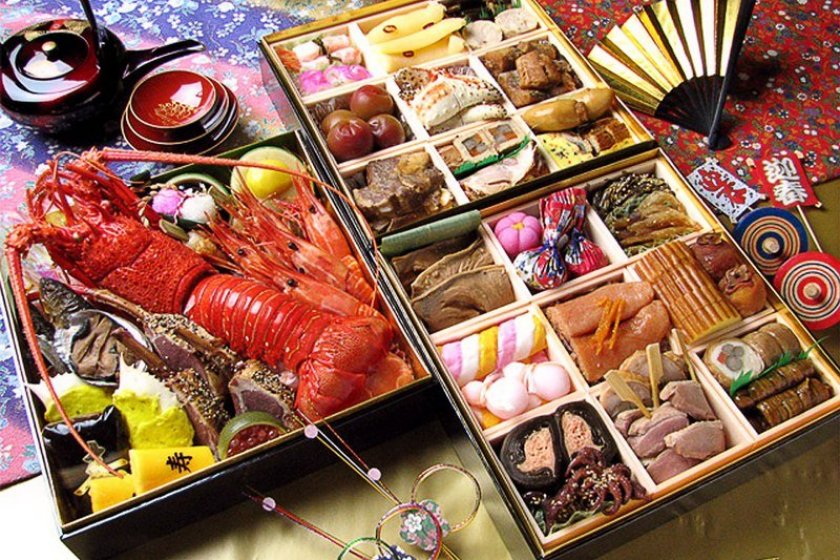 The tradition and meaning of New Year's dishes!

It’s not an understatement to say that O-Shogatsu or New Year’s is one of the biggest and perhaps most important events of the year in Japan. From watching the first sunrise of the new year to sharing details of your first dream and searching for deeper meanings, there is a lot to do on the annual holiday. So, it’s no surprise that food plays a big role in the celebration and festivities as well.

From around the country, you’ll discover assorted o-sechi (Japanese New Year foods), each with its own meaning or symbolism for the year ahead! Whether you order your o-sechi or cook it yourself, you're in for a custom dating back hundreds of years.

The tradition of o-sechi began during the Heian period (794–1185) and referred to one of the five seasonal festivals in the Kyoto Imperial Court. As it was taboo to cook anything during the first three days of the new year, the original o-sechi meals were most often boiled vegetables (nimono) lightly preserved with soy sauce, mirin, and sugar.

Traditional o-sechi is often served in a multi-tiered box or jubako. For many families, it has become a tray-like dish with individual compartments for each o-sechi dish.

Rather than covering every o-sechi dish and the regional variants, let’s take a look at some of the classic o-sechi foods (there are many more than those listed below):

Just as important as the food—culturally speaking—is the jubako it comes served in. Historically, these lacquer boxes were black on the outside and vermilion inside. The boxes were stacked as a metaphor for building up joy for the new year. O-sechi scholars argue over whether three or four stacks is the perfect number for the jubako with many arguing that four represents good fortune for each of the four seasons, while others argue that four is unlucky and the number three represents perfection.

Inside the box, it’s all about numbers and arrangement, too!

Dishes should be arranged by how they were cooked (e.g., boiled foods, grilled foods, etc.). It’s equally important that they be aesthetically pleasing; many jubako layouts are organized in squares or diamonds—and gaps between dishes are not allowed.

However you decide to enjoy your o-sechi, whether it’s a traditional jubako or just a delivery pizza with happy wishes for the new year, you’re carrying on a long tradition of fortune to come. 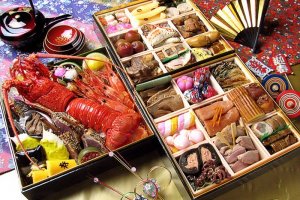 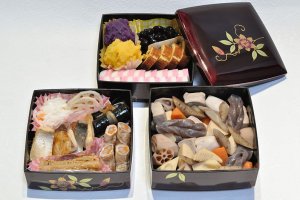 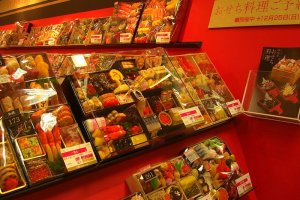 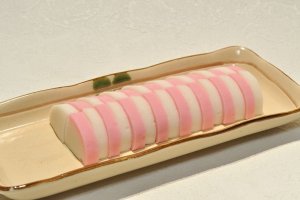 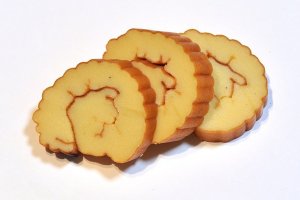 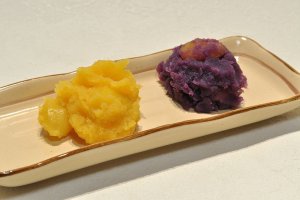 Bonson Lam 11 months ago
You can definitely immerse yourself in tradition in making o-sechi, it is like mentally preparing yourself for the new year. Just don't make too much, otherwise you could be eating the same thing for weeks.
Reply Show all 0 replies

Sleiman Azizi 11 months ago
Love me some osechi. But yeah, to prepare them yourself is a lot of work. Much respect to anyone who does it....
Reply Show all 0 replies

Elizabeth S 11 months ago
It's so much effort to make these! Some families I know make a few of the dishes but not the whole jubako deal. This year I'll make a few and serve them on the first few days of the year. But I'll likely do some cooking.
Reply Show all 0 replies

Elena Lisina 11 months ago
Gorgeous treats!
Reply Show all 0 replies
5 comments in total
Back to Contents