Seated in the south-central region of Japan's main Honshu island, the seven prefectures of Kansai - Hyogo, Kyoto, Mie, Nara, Osaka, Shiga and Wakayama are home to a huge array of traditional crafts. With its history of refined sophistication, Kyoto naturally stands out but other prefectures also shine with an eclectic mix of crafts that include intricate fly fishing baits, fire-resistant pottery and beautiful stencilling. Here is a simple introduction to these and other traditional crafts that can be found in the Kansai region.

A highly refined tradition in Hyogo prefecture, Banshu kebari are fishing flies made from bird feathers that have been wound with silk thread around a tiny hook. Decorated with gold leaf and lacquer, the brilliant colour designs of the flies change according to the season, weather, location and even water depth and fish species.

With around thirty different weaving techniques, Kyoto prefecture's Kyo-nui embroidery is an intricately complex traditional craft. Making use of costly materials like silk and precious metal threads, thousands of different colours and shadings are available, making this craft an icon of elegance and sophistication.

Ise katagami from Mie prefecture is a method of creating stencils used for printing. Numerous layers of traditional washi paper are dyed with persimmon tannin for extra strength before being cut into shapes using classical cutting techniques. The delicate image of the final stencils often serve as gifts in their right rather than being used for printing.

The tea ceremony would not be complete without Nara prefecture's Takayama chasen tea whisks. Made from bamboo, these bamboo treasures are used for frothing Japanese tea and come in over sixty different styles. Colour, shape, and type of bamboo used all exhibit differences depending upon the school of tea they are created for.

Dating all the way back to the eighth century, the naniwa suzuki pewterware of Osaka is a highly individualised traditional craft. Eminently malleable, the craft's tin metal is perfectly suited for beverage holders, particularly beer and sake drinking sets, as well as being used for flower vases and tea storage containers.

One of the main traditions of pottery in Japan, Shigaraki ware from Shiga prefecture is an image of strength and robustness. Characterised by its use of thick clays, the final creation is not only highly fire resistant, but the warm colouring of Shigaraki ware gives off an indelible impression of rustic earthiness.

Also known as kuroe-nuri, Wakayama prefecture's Kishu-shikki lacquerware is famous for its vermillion colouring over a black undercoat. Durable and practical, the traditional vibrant colour coating would eventually chip away to reveal the original black beneath, giving each crafted piece its own personality and character. 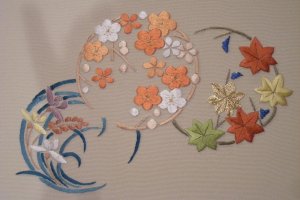 Bonson Lam a month ago
Hi Sleiman the fishing flies are amazing too. I didn't know about that, even though I have been visiting craft stores for a long time. I also like the folding fans in Kyoto. https://en.japantravel.com/kyoto/kyoto-folding-fans-boutique-and-edo-period-games-with-junior-geisha/216
Reply Show all 1 replies

Sleiman Azizi Author a month ago
There was a lot to choose from when it came to Kyoto but those fishing flies floored me. Never would I have thought that a fishing fly would be nationally recognised as a traditional craft!
Reply

Kim B a month ago
The embroidery is lovely! I really like how much inspiration is drawn from the seasons in many Japanese crafts.
Reply Show all 1 replies

Sleiman Azizi Author a month ago
Seasons are almost everything in Japan. Quite nice too.
Reply
6 comments in total
Back to Contents