The power puncher of central Tokyo

Tokyo's smallest central municipality, Taito City Ward undoubtedly packs the largest punch. So full of things to see, the city could easily satisfy an entire trip to Japan with space left over for more trips. Here is an introduction to just some of the many landmarks and historical spots in Taito and how to reach them.

This 400m-long institution in Ueno is a treasure of hustle and bustle street market authenticity. Ameyoko emerged after World War II as the classic Tokyo black market and is now an almost-maze of under-the-rail-track vendors offering street foods and mrchandise. A classic visit, it is easy to imagine yourself getting lost in downtown splendour here.

A 2-minute walk from Ueno Station on the JR Yamanote Line.

A 3-minute walk from Asakusa Station on any of the Ginza, Toei Asakusa or Toby Skytree lines.

Hakubutsukan Dobutsuen Station is an understated relic of the old railway lines that existed from the early 20th century. Effectively closed in the 1960s but officially so in the 1990s, the station underwent a brief opening as a gallery space in the late 2010s. The stately design - along with the eerie ghost-like ambience when open - is worth the visit.

A 9-minute walk from Uguisudani Station on the JR Keihin-Tohku or Yamanote lines.

Japan's oldest amusement park, Hanayashiki Amusement Park originally started out as a flower park in 1853. Full of quirky amusement rides and memorial spills and thrills, the park's retro atmosphere is a throwback to the good old days of simple thrills and spills. Admission is JPY1000 with ride tickets set at JPY100.

A 5-minute walk from Asakusa Station on any of the Tobu Skytree, Ginza or Toei Asakusa lines. 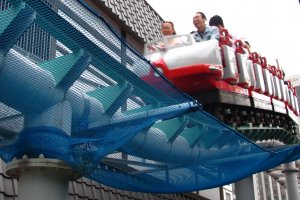 Sander van Werkhoven a month ago
Even after all these years still easily my favorite part of Tokyo. There's so much to see and do, and it is so full of atmoshphere. And while it can be *very* touristy, it doesn't bother me too much here, as it hasn't lost its authenticity.
Reply Show all 1 replies

Sleiman Azizi Author a month ago
No matter what, Taito is guaranteed to be interesting. There is literally so much to see... and see, and see. Truly amazing place.
Reply

Elena Lisina a month ago
Very popular with tourists district, but at night it's very nice! :)
Reply Show all 0 replies
3 comments in total
Back to Contents