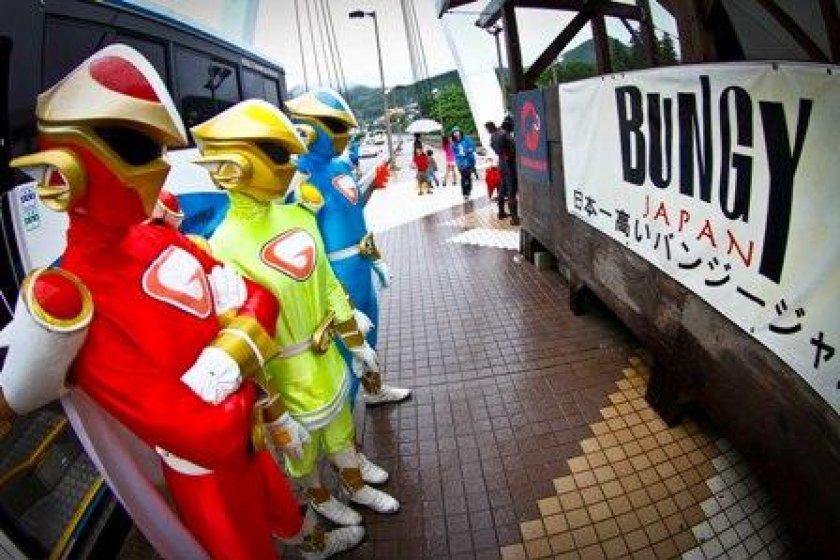 Throwing yourself off a bridge in the name of enjoyment

Fancy dress encouraged - hides the nerves if nothing else

Scaring the bejesus out of people is a funny way to make your living, but it seems to be working for Bungy Japan judging by the crowds on their bridge in Minakami. Much against my better judgement I’d agreed to throw myself off this bridge attached with nothing more than an elasticated rope.

Bungy Japan boasts Japan’s only bridge bungy (meaning you get to jump over water rather than a crash mat in a car park) and their 42 metre jump is a key player in Minakami’s outdoor adventure scene. It is run by a mixed team of Japanese and Antipodeans – why is it that those from the Southern Hemisphere keep inventing ways to terrify yourself in the name of fun?

The prospect of doing this had me awake with trepidation the night before, and when I finally fell asleep gave me anxiety dreams until morning. I wouldn’t say that I’m scared of heights, more scared of falling of high bridges.

There is a real buzz around the bridge with a mix of curious old Japanese onlookers, obviously nervous yet-to-jump folk, enthusiastic already-jumped who are still pumped on adrenaline, and a cheering group of people who (sensibly?) have no intention of jumping.

I was nervous from start to finish. The Bungy team run a really slick operation, strapping you in and telling you everything you need to know. At this point you are on the platform that sticks over the side of the bridge and it feels really high. Making your way to the edge with your ankles strapped together is no small feat and at this point the butterflies are raging in the stomach. I know now that the scenery from the bridge is beautiful but I am trying so hard not to look down at the yawning chasm below me that I don’t really take it in. I'm not sure I really want to do this but I also don’t want to be one of those people who dithers on the edge and needs a countdown to push them over. A massive rush of blood and I hurl myself into the abyss. (I say “hurl” as that is how it felt but video evidence proves it was more of a pathetic, reluctant flop.) It actually felt quite good realising that I could make my body obey my mind and do something so against instinct. A bit of freefall, the huge relief of feeling the bungy rope take your weight and then some bouncing around before finding your feet back on solid ground. It is at that point that you realise how much fun it was.

If you subscribe to the “Do one thing everyday that scares you” belief then bungy jumping is for you. The fear and the nerves are a good thing and you end up with a real sense of achievement. 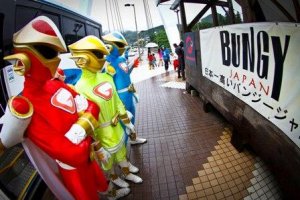 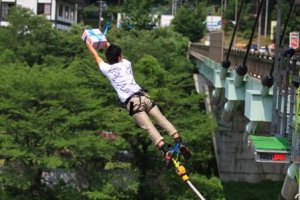 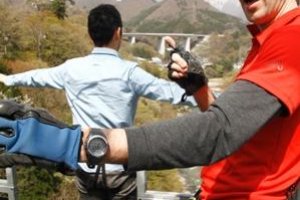 Victoria Vlisides 5 years ago
Totally did this! Amazing place for my first bungee jump! Staff was so great, too.
Reply Show all 0 replies

Rufus Starbuck Author 9 years ago
A good kind of scary. The whole area is so green at the moment - really pretty. Also if you are on the bungy bridge at midday on the weekend one of the working steam trains comes out of the tunnel with a big burst of steam. It's a pretty amazing sight.
Reply Show all 0 replies

JapanTravel Guest 9 years ago
I am so afraid of heights I doubt I could do it, but big ups to you! If I ever try it, I'd love to do it somewhere like this, looks beautiful!
Reply Show all 0 replies
4 comments in total