Gunma Prefecture has unofficially nicknamed itself Japan’s “Haniwa Prefecture” because of the many well preserved archaeological discoveries of the clay figurines around the Gunma area. Haniwa are hollow terracotta figurines made in the Kofun Period. They were made to be buried or entombed with the dead in kofun (keyhole shaped burial mounds). The figures are created in the shape of soldiers, horses, shrine maidens, etc. to help send the spirits of the dead off and protect the tombs.

Uekeno Haniwa no Sato Park is centered around Hachimanzuka Kofun, but there are actually 3 kofun within the park. Collectively, they are called the Hodota Kofungun. Hachimanzuka is the largest, and visitors can go into it to see an original coffin. The Hodota Kofungun are approximately 1,500 years old.

Hachimanzuka is surrounded by many, many haniwa. The figures are placed around the perimeter, and on the outer ledges of the keyhole. They also line the top of the mound. Obviously, these aren’t originals, but they are completely accurate to artifacts found in the area. There’s many different kinds scattered around, from pots to horses to generals.

I’m not sure how high the kofun is, but when you climb to the top, you get a lovely view of Mt. Haruna and the Takasaki city-scape. At the rounded end of the keyhole, there are spiral staircases descending into a viewing area. You can see a large boat-shaped coffin preserved where it was found. Unfortunately, all the signage is in Japanese so if you’re not confident in your ability to translate historical terminology, you’re left to just enjoy what you can see.

Across the street from the Hachimanzuka Kofun is a small archaeological museum. It only costs 200円 for adults. I actually ducked into the museum to get a break from the heat, but was delighted to find that it was a really lovely and well-put together display. All the signage is in Japanese, but the desk staff can give you a sheet of information in English. The translation is a bit iffy – but definitely still understandable.

The main display room of the museum is a diorama of the area as it would have looked 1,500 years ago. I was fascinated to learn that this is actually one of the most well preserved and extensive archaeological sites in Japan – and the first discovery of a 5th century king’s house (called the Mitsudera site). The reason why the area is so perfectly preserved (enough that researchers were actually able to find foot prints in an ancient rice paddy) is because of Mt. Haruna erupting and encasing everything in ash – Pompeii style. Above the diorama, visitors can watch a video explaining the effects of the eruption.

There are displays all along the walls of artifacts found in the dig, or representations of what the village would have looked like. My personal favorite display was of the “oldest ornamental shoe in Japan.”

Other displays feature replicas of all the kinds of haniwa that were found on the site and explanations of who or what they were, casts of the footprints found in the preserved rice paddy, a large model explaining how the kofun was built, and excavated farming tools.

Bus: Use the Takasaki City bus to ride to the Akiha mae stop.

Car: Exit the station on the west side, and follow Route 17. Turn on to Route 28 until you pass Kamitsukeno-sato Museum. 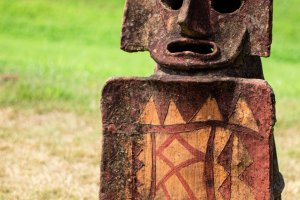 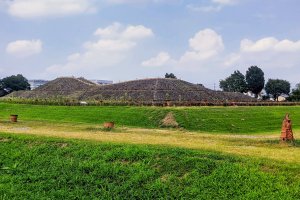 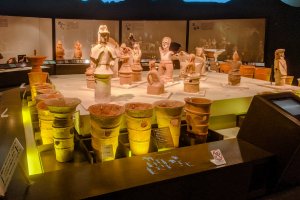 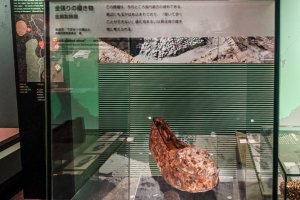 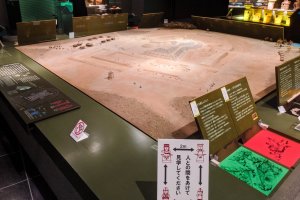 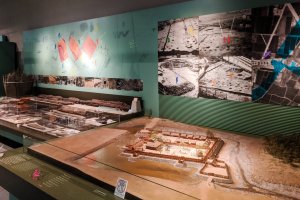 Elena Lisina a year ago
Thanks for interesting information! I'm interested in ancient history.
Reply Show all 0 replies

Elizabeth S a year ago
The density of kofun mounds is high in the Kanto region, but not all of them are as big as this one. There’s one in my neighborhood in northern Chiba.

A lot of them disappeared as cities grew.

Great that the archaeology is well preserved in Gunma.
Reply Show all 0 replies

Kim a year ago
Another great insight into Gunma - I never knew of this place! Gorgeous photos as always, too!
Reply Show all 0 replies
3 comments in total