Other lines available include the Kure Line for Takehara and Kure, and the Sanyo Main Lines for Saijo, Onomichi and Fukuyama.

Despite being located in the beautiful Seto Inland Sea and surrounded by lush, green mountains, perhaps the best thing about Mihara Station is how well laid out the directions are. Signs point in the exact direction of lines, the lavatories and other facilities. Due to how straightforward the signs are, navigating the station is a simple task.

Furthermore, posters displaying nearby tourist spots are at every corner of the station. Some of these nearby areas include Mihara Castle, which is only a 13-minute walk from the station, Sunami Seashore Park and Miharashi Hot Springs.

The station itself is quite small. It is made up of three main parts. There are two entrances which both lead into the first area, where the information desk is located and where you can purchase tickets. There are also tables around the room with tourist information and small stores to purchase snacks and souvenirs.

As soon as you reach the Shinkansen area, you will find it hard not to notice several octopus statues and a giant daruma doll. Throughout the station, octopus flags and decorations are laid out. Octopus is Mihara's specialty food, thus Mihara is known as the octopus town, and the station will make sure you remember that.

Another great aspect to the station is it's spaciousness. The station itself is uncrowded, the rooms wide and there are seats all throughout for those wanting to rest while traveling. 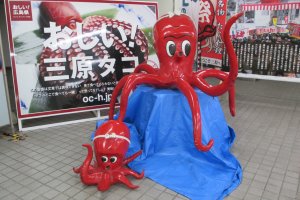 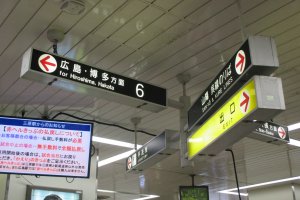 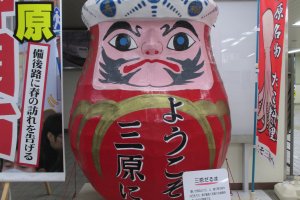