Make your own keepsake

I will never forget the time when I made the pledge, “for better and for worse, until death do us apart”. The thought of an old married couple on the couch, comfortable in each other’s arms, has appeal for time immemorial, extending beyond the reach of memory, ancient beyond our cognitive recollection, memory or record.

In Japanese weddings, the idea of a happily married old couple is symbolized by longevity motifs such as cranes and tortoise. These images are often used in decorations and in the ceremony itself, as a way for well-wishers to cheer them on for a long and joyous relationship. The presents from these weddings could include indigo dyed textiles with these timeless symbols of love.

In a time of mass production, having a tailor-made keepsake is very special, a tradition that is kept alive by textile makers, including indigo dyeing workshops that are dotted around the inland sea, including Awajishima, and as far as Kyoto.

At Indigo Trip, visitors can experience indigo dyeing firsthand, with classes held in English, and to really immerse yourself in indigo culture, you can stay overnight. You can dye your own hemp cotton clothing or create a keepsake with traditional Japanese motifs.

The appreciation of these crafts was not always the case. There was a time when many Japanese had turned away from these traditional practices, seeing them as slow or backward. Indigo dye can take a year to make, and it was too easy to substitute these natural hues for quicker and cheaper chemicals. It is a highly labour-intensive method requiring water, bacteria and constant turning of the fermented leaves. In some ways making indigo dye is like making sake, using fermentation and just the right temperature to turn over the ingredients, taking 100 days to ferment in winter, depending on the weather and location. Today we are seeing a renaissance, the first blooms of spring of Awaji culture. Indigo is very much part of the everyday life here, for it is in the wearing that their qualities come to life. Its anti-bacterial qualities, long known to protect Samurai in battle, are healing in ways that more people don’t realise, finding new functions from sanitary masks to fire-resistant cloaks.

“With ikebana the flowers and their seasons are only temporary, like the concept of wabi sabi.” This concept of passing beauty is reflected in the textile and clothing design at Aizenkobo.

Kenichi Utsuki is a third-generation kimono obi sash maker and indigo dyer, but it was his wife whose philosophy transformed his art to overseas audiences, including an exhibition in the British Museum. We don’t know what will happen tomorrow, so enjoy each moment you have now. This is the philosophy behind her work.

Aizenkobo is housed in a 18th century wooden town house in Nishijin, but they conduct occasional classes around the inland sea, including Kobe and Hiroshima. You may even see Kenichi in the field inspecting indigo plants, which he carefully selects for his craft.

Miyama is another town where traditional indigo handiwork is being revitalised for the next generation. There, people would live from the bounty of the land, and once the swallows return in spring, would plant indigo, a blue flowering plant whose compost would nurture the soil, getting it ready for the following year. In the days of old, items like clothing were heirlooms to be passed to the next generation; in the same way that land or property would be today.

Upstairs in the museum is a potpourri of indigo dyed clothing on display from around the world, curated by Hiroyuki Shindo from his travels in the late twentieth century across several continents. In some ways he is retracing the journey of indigo dyeing itself, from Ancient Egypt in 2000 BC, through its adoption as a handicraft in Europe, Central America and Asia. In the Japanese vocabulary, there are a dozen words to describe different shades of indigo. A cloth that was only dipped once in the dyeing vat is called kamenozoki, or "blue like the distant horizon", while one that has been dipped twenty eight times is called jokon tomekon, or midnight blue. In between are tones like asagi, or sky blue, as well as konjiro, or royal blue. The motifs on each cloth is just as special as the hues, ranging from bamboo leaves to Japanese wisteria, or fuji, to reflect their affinity with the changing seasons. 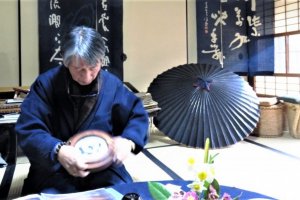 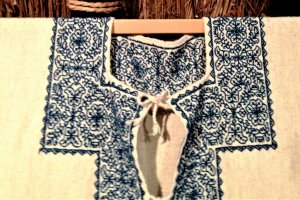 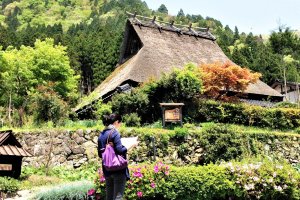 Elizabeth S a year ago
Such gorgeous colors and motifs. It's heartwarming to see Japanese people reinvigorating traditional crafts so the world can enjoy them.
Reply Show all 1 replies

Bonson Lam Author a year ago
Yes absolutely, it is great for the future for both the Japanese and everyone around the world. Good to see Aizenkobo also making masks which incorporate the anti bacterial qualities of Indigo.
Reply
2 comments in total