The power of dreams

When was the last time you felt truly alive?

For Ken, it was when his eyes lit up at the smart Japanese bilingual front desk staff at the Nikko Hotel in San Francisco. To him, these staff were the embodiment of the future, connecting his Japanese roots and his aspiration for international understanding.

Ken’s journey to becoming an international hotelier was one that was filled with twists and turns. His father who suffered during the war, encouraged him to travel abroad at a time when it was easier to take the well-trodden path to lifetime employment in a large company. In contrast his grandmother agonised at his choice.

It was not easy adjusting to life overseas, but when he won a scholarship at Paul Smith’s College, his life took a turn for the better, experiencing hands on experience in hospitality as well as a deeper meditation of his relationship with himself, society and Earth itself.

Alas, one day his uncle fell ill, and then so did his grandmother, her tears welled up as she thought she will never see Ken again.

Her tears would not go unanswered. It was time for Ken to come home.

It is said that we leave something of ourselves behind when we leave home. We can only find ourselves again when we return. It is like we are visiting ourselves.

Nevertheless, it was not an easy path to become a Senior Sales Manager, starting as a bell boy, but his lifelong learning from his mentor helped paved the way.

Now, his dream is to nurture the next generation to take over the baton, one that is taking shape in the hotel. When it was opened in 2000, only 10% of the staff were local, but now it has blossomed, with over 30% of staff who have grown up on the island.

In a moment of reflection and emotion, Ken adds that most people on this island are engaged in primary industry, like farming of Indigo and fishing. The transformation of the farmers’ daughters and sons into world class front desk professionals ensures that guests can experience firsthand country hospitality as well as insights into the best natural and cultural offerings that this island has to offer.

The resort’s proximity to marine facilities allow its restaurants to showcase local delicacies, such as octopus and whitebait. Many staff are descendants of third or fourth generation farmers, and you can see the fruit of their labour with work with the famous onions, strawberries and Awaji beef in the resort menus. Recently we have seen a revival of sorts on the island, with a younger generation of more internationally minded entrepreneurs shining a light to the traditional arts and crafts, such as the Kunjundo incense maker, as well as sake makers opening their doors to the public. For more active holiday makers, the island is filled with sports activities, from scuba diving, kayaking, horseback riding and golf, to name a few. At the end of the day, every guest can look forward to relaxed luxury, and between the signature bed, Lavender Balm and the gentle sea breeze off the glistening Osaka Bay, it is a recipe for the most peaceful slumber.

The resort is part of the Awaji Yumebutai, a stage in which to dream. Like a phoenix rising from the ashes, it was Takao Ando’s dream to transform a scarred hillside into a sanctuary to rebuild both the physical and spiritual landscape following the Kobe Earthquake. Ando wanted to create a space where “visitors are surrounded by the richness of nature and find sensory pleasure in their existence”.

For me there is a certain sense of poetry as we watched the butterflies dancing over the flowers on the Hyakudan-en, the hundred stepped gardens , paying honour to the 6,000 souls that have gone before us in the Kobe Earthquake in 1995. Next year is the 10th anniversary for Japan Travel, which was founded as a living monument to the 2011 Tohoku earthquake, in the same sense that Yumebutai is a testament to the Kobe Earthquake.

At a time when we are searching for purpose to travel, Yumebutai is like a lighthouse, a living sanctuary illuminating a path forward, showing how man and nature can live together. Before us is a massive amphitheatre, in which the seas and the skies frame the theatre space. From sunshine to black clouds, this is a place where we explore our relationship to society and Earth itself.

So slow down, breathe in, and feel the flowers swaying in the breeze. When you see the moon rising above the seashore at this Resort, reflect on the legacy of Ken’s grandmother, whose roots are deeper than trees that grace the gardens.

Despite its proximity to Kansai and Kobe Airports, Awaji Island is off the beaten track for most visitors. Ken explains that many travellers to Kansai want a holiday combining big city excitement and country comfort, and recommends an itinerary featuring a three day stay in Osaka or Kyoto, followed by two days in Awaji, allowing guests to have the best of both worlds. From the airport, public transport (bus or ferry) is available to Awaji Island in less than 2 hours, though a rental car is also a good option for day trips around the island. 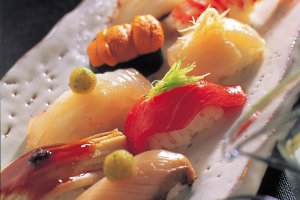 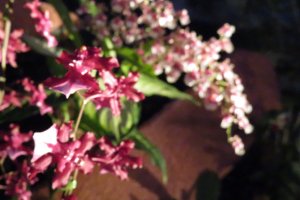 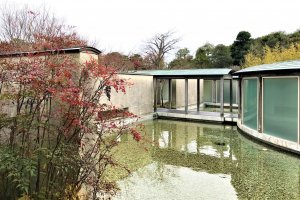 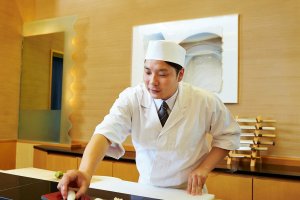 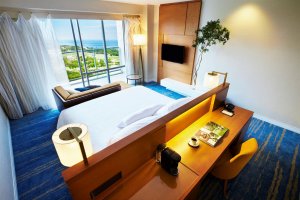 Novia Mardasari a month ago
I like the view from ur room and supported by good design interior.
Reply Show all 5 replies

Bonson Lam Author a month ago
Every room in this giant bird of a building has views of the green hills or the ocean beyond. It is very spacious compared with the city hotels of Osaka and you feel as free as a bird high in the skies above.
Reply

Novia Mardasari a month ago
Wow amazing... maybe rate will be expensive 😅
Reply

Bonson Lam Author 2 weeks ago
Yes it is amazing! You can share a room with 4 adults with two double beds which is good value and cheaper than many similar hotels in Osaka city with a very big room
Reply

Bonson Lam Author 2 weeks ago
Yes! I stayed by myself and it was too big for me!
Reply

Elizabeth S a month ago
The design is austere but intriguing. It looks like a lovely place to stay.
Reply Show all 1 replies

Bonson Lam Author a month ago
I have to agree with you. In some ways I like Ando's work in Naoshima better, they are less 'heavy" and more to a human scale. Here in Awajishima, the "nature's amphitheatre" effect is so huge, maybe Ando was trying to respond to that with a very large set of buildings. It is a great place for people to stay, especially after first visiting old Japan (Kyoto) and modern Japan (Osaka), and then to come here and see how Ando has interpreted both old and modern in the circular, geometric, and almost post modern like courtyards and teahouses, and then you are in for a treat meeting the locals in the farms, sake breweries and cycling through herb fields.
Reply

Kim B a month ago
It's always nice hearing about the people behind a business. I've had great experiences at the Westins I've stayed at before.
Reply Show all 1 replies

Bonson Lam Author a month ago
Yes, me too. Getting to know the people to me makes a place come to life. It is not checking in to a faceless hotel anymore but knowing its heartbeat. I hope you can have this opportunity too.
Reply
10 comments in total